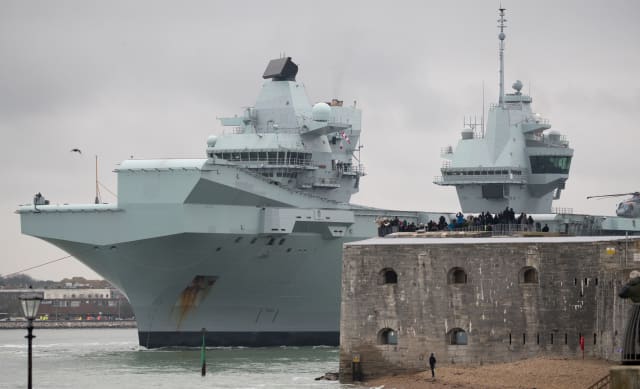 The planned sailing of aircraft carrier HMS Queen Elizabeth has been postponed to allow Covid-19 testing for the ship’s company.

The Royal Navy warship had been expected to depart Portsmouth Naval Base for a period of sea training at the start of next week.

But a spokesman for the service confirmed that the departure would be delayed by 48 to 72 hours for the 700-strong crew to be tested.

He explained that once the ship had sailed, it would spend a period in quarantine to ensure all of the crew were clear of the virus.

The move comes after shadow defence secretary John Healey called for the military to be tested and for large-scale training exercises to be postponed to protect personnel.

The Navy spokesman said: “In addition to an isolation period at sea, the Royal Navy is now making use of spare NHS testing capacity to test the crew of HMS Queen Elizabeth prior to sailing. This will necessitate a short but manageable delay in sailing.

“This is the right and sensible thing to do to ensure the Navy can continue to deliver on operations now and in the future.”

The Queen Elizabeth is due to sail for a period of sea training and carrier training around the UK to help prepare it to be in a position to declare carrier strike capability later this year ahead of its first deployment planned for early 2021.

The spokesman added: “HMS Queen Elizabeth is sailing to conduct operational sea training, required as preparation for further training later this year and which together will ensure that she is ready for deployment in 2021.

“The continuation of this training has been agreed by senior leaders across defence.

“She will be operating in waters close to the UK coast and the commanding officer has the discretion to cease the training, if deemed necessary.

“HMS Queen Elizabeth has a key role to play in the defence of the United Kingdom and the Royal Navy will continue to conduct essential training ashore and at sea in order to fulfil its critical outputs now and in the future.”