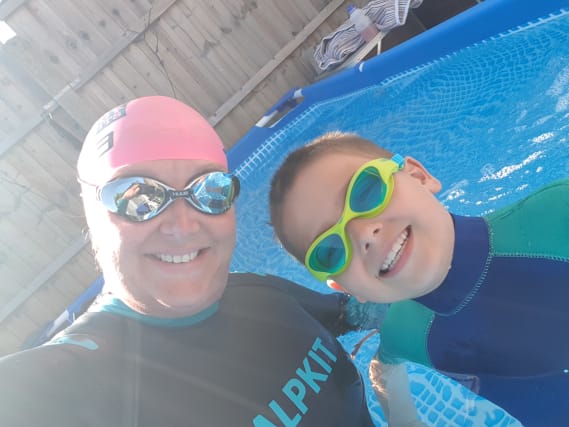 A charity worker has taken on a back-garden marathon, and a senior police officer fought back the tears as he was released from hospital after battling Covid-19.

Here’s a look at some of Wednesdays more uplifting stories which you might have missed.

– Charity worker to swim 2.6km in back garden after marathon disappointment

A charity worker from Romford will swim 2.6 kilometres in her back garden on Sunday to raise money for London’s Air Ambulance service.

Sophie Allen, 38, is one of hundreds of people taking part in fundraising activities to help bridge the gap left by the absence of the London marathon, which has been postponed until October.

After the announcement, which has left thousands of runners across the UK disappointed, marathon organisers set up the #twopointsixchallenge, encouraging people to take part in some form of physical activity using the numbers two and six – in reference to the length of the race.

A senior police officer has given an emotional thank-you speech to NHS staff who cared for him as he battled Covid-19.

Chief Superintendent Phil Dolby tweeted updates about his condition, including breathing difficulties, in the first week after falling ill, but was then admitted to intensive care and put on a ventilator.

The West Midlands Police officer spent more than three weeks in Worcester Royal Hospital, and was reduced to tears as he made his way out to the sound of applause from NHS staff.

“That’s a gift I’ll never stop thanking you for.”

An animal lover is set to listen to the noughties hit single Who Let The Dogs Out? non-stop for more than 24 hours to raise money for charity.

Amy Ockelford, 31, will be playing nothing but the Baha Men’s beloved track in an unconventional marathon.

She said she is not barking mad and is keen to raise money for the RSPCA, for whom she works as a press officer.

And while Ms Ockelford says she does “quite like” the song at the moment, she does not know how she will feel 26.2 hours (and 32,625 woofs) later.

Chris Tarrant’s daughter praised Michael Sheen’s performance in ITV’s Quiz after her son could not tell the difference between the two.

Four-year-old Haris Ali Khan was filmed by his mother Fia Tarrant saying “it’s grandpa” at Michael Sheen, who plays Tarrant on the series.

Ms Tarrant, a Heart Radio presenter, told PA: “I showed him (Haris) a clip of dad on YouTube and said ‘that’s grandpa, not that man!’ He didn’t get it at all!

“It’s so pure, they just say what they think, also Michael Sheen is bloody good.”

Sheen replied to the video himself on Twitter, saying that Haris’s confusion was the “best review I’ve ever had”.