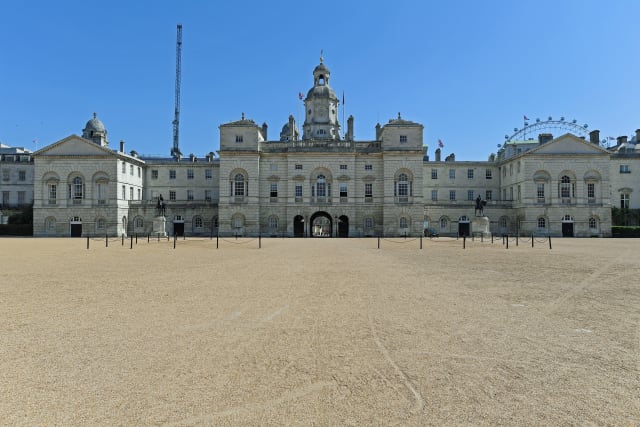 Streets and roads lie deserted as Britain marks one month since lockdown measures were put in place across the country to curb the spread of Covid-19.

Pictures taken at midday on Wednesday show the public heeding guidance issued by the Government to stay indoors, with landmarks and beauty spots unoccupied.

More than 18,000 people have now died in hospital after testing positive for coronavirus in the UK.

Boris Johnson ordered the unprecedented lockdown on March 23, which was extended for at least another three weeks on April 16.

Usually bustling mid-week with brokers and bankers, business district Canary Wharf was eerily quiet as the Government urged the public to work from home where they can.

Strict measures warn drivers against all non-essential journeys, leading to motorways and roads free from their usual traffic.

The M5 motorway, which links the Midlands to the south west of England, was almost deserted of cars as the clock struck 12 on Wednesday.

Despite the spring sunshine, the waterfront in Liverpool is empty of both shoppers and visitors after all non-essential businesses were told they had to close.

Firms across the country counting the cost of the coronavirus crisis are keen to find out when lockdown rules could begin to ease.

But the Government has warned any relaxing of the lockdown measures can only be taken when five key tests have been met.

These include protecting the NHS’s ability to cope, ensuring a drop in the daily death rates and having reliable data to show the rate of infection is decreasing to manageable levels.

In central London, Waterloo station is almost devoid of commuters despite being the busiest station in Britain – revealing the impact of the disease on travel.

Train journeys have plummeted amid the outbreak and operators have suspended services because of the current crisis.

On Wednesday, Health Secretary Matt Hancock said he was confident the country was at the peak of the disease, but stressed that continued social distancing was needed to bring the number of new cases down.

Those who do leave the house are told to keep a safe distance of two metres apart where they can, such as those pictured on near-empty streets in Newcastle-upon-Tyne.

All retailers selling non-essential items have been told to close, leaving only a small list of shops open, including supermarkets and newsagents.