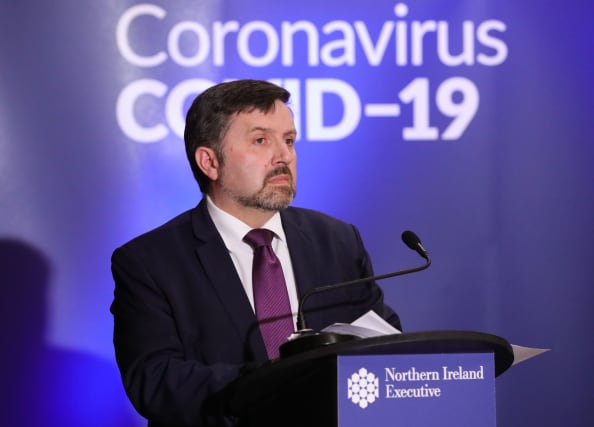 Northern Ireland’s health minister has revealed a sudden steep increase in the coronavirus death toll came after he instructed his officials to look into the figure.

The Department of Health on Wednesday announced that the number of Covid-19-related deaths had increased by 34 to 250.

This included eight deaths which occurred on Tuesday, while the remainder involved fatalities in previous days that have been added to the official record.

Robin Swann described the latest figure as a “significant increase”, adding that he appreciates it will “cause some alarm”.

He explained that he had asked officials to investigate following a very low number of deaths announced on Sunday.

“I became concerned about a low report that we had on Sunday where we only actually recorded one death and I asked for a thorough piece of work to be done,” he said.

“That piece of work has indicated a number of deaths due to Covid-19 but also with Covid-19 and I asked for that figure to be brought forward today.

“When the Northern Ireland Statistical and Research Agency (NISRA) figures do present for the period of time for the next week to two weeks, it will capture a number of those deaths that we’re recording today rather than seeing a significant increase in the differential between what we’re reporting and what NISRA is reporting.

“It’s not that these deaths were never going to be reported, it’s more in the timeline of the report.”

Also appearing at the daily executive update, chief medical officer Dr Michael McBride said there is “always a built-in delay” in the process of the recording of deaths.

“It will be when we have the data in the fullness of time from NISRA which will look at all cause mortality and excess deaths in this period of time as compared with previous years that we will have a true reflection of the true impact of Covid-19,” he added.

A weekly NISRA bulletin is drawn up separately using death certificates filled out by medical professionals in which Covid-19 is mentioned.

“It is deeply worrying that weeks into this crisis that such an error can be made in terms of reporting the number of deaths,” he said.

“These are people with families who have been plunged into grief by their loss, not mere statistics.

“I will be raising this issue directly with the health minister at the Assembly health committee meeting tomorrow.

“The health minister and department need to take steps to ensure an error like this never happens again.”