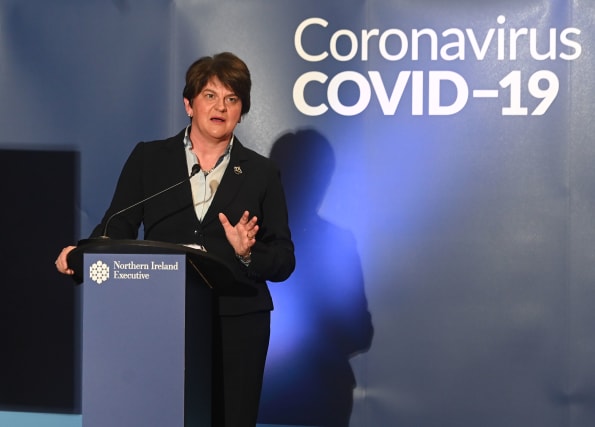 Northern Ireland may emerge from coronavirus restrictions at a faster pace than other parts of the UK, the First Minister has suggested.

Arlene Foster said lockdown measures will be eased when certain scientific and public health criteria are met and not against set timelines or dates.

In an interview with Cool FM, Mrs Foster said the executive is also set to provide more clarity on the controversial issue over whether people should be able to travel to take part in exercise.

But she ruled out the introduction of a distance restriction – such as the 2km in operation in the Irish Republic – to ensure people exercised locally.

The impact of coronavirus has not been as severe in Northern Ireland as other parts of the UK. The region had recorded 250 deaths in the pandemic by Wednesday.

The First Minister was asked whether the contrasting experiences meant Northern Ireland may move away from the restrictions at a different pace from worse hit parts of the UK.

“It will be led by the criteria that will be set down and agreed by ourselves in the Northern Ireland Executive in conjunction with the our colleagues in the other parts of the UK,” she told Cool FM.

“And because of that you could well see different parts of the United Kingdom move in different time to other parts, because it will be criteria-led.

“What do I mean by that – we will have to look at the amount of admissions to hospital, the admissions to intensive care units, the number of deaths we have, what it means for us in terms of the science.

“We have a scientific advisory group in London that advises and then we also have our own advisory group here in Northern Ireland and our own chief medical officer.

“So they will be looking at all of that information, all of the data we collect in Northern Ireland, we will bring that together and then we’ll look at it that way.”

Earlier on Wednesday, Health Minister Robin Swann said the decisions around restrictions would be primarily based on what the scientific evidence base was in Northern Ireland.

At the daily Covid-19 briefing he was asked whether the region should be part of an all-island exit strategy with the Irish Republic, given the shared land border.

“It’s important that we take our scientific guidance based on the science that is applicable to Northern Ireland,” he said.

Chief medical officer Dr Michael McBride said he and officials were in close contact with colleagues south of the border.

“There is no doubt that we share a common land mass with our close colleagues and neighbours in the Republic of Ireland and that is something that we will closely need to consider,” he said.

“And I think the other thing which I would point out is that the virus on this island in the Republic of Ireland and Northern Ireland is behaving very similarly and different to other parts of the United Kingdom.”

In the interview, Mrs Foster also said the executive intended to offer more clarity on how far people can travel from home to take part in exercise.

Police have been accused to going beyond the rules set by emergency legislation by telling people that they cannot drive to a location away from their home for exercise.

Officers have insisted they are working in line with legal advice and do use discretion when appropriate.

Mrs Foster said the executive would discuss the issue on Friday. She said she realised there were people, such as those living in cities, who did need to travel a short distance to exercise.

“I know there has been some ambiguity about that and the executive are looking at this matter again and will be giving more clarity in relation to all of that before the weekend,” she said.

Asked if ministers would consider setting a distance limit similar to the 2km measure in the Irish Republic, she said: “I wouldn’t be in favour of putting a restriction like that on because there are many people who live in the city and they may have to travel a longer distance than that to be able to exercise.

“So the mind of the executive is not moving in that direction but I do think we will be wanting to give more clarity in relation to this issue and we’re going to discuss it all again on Friday at the executive.”