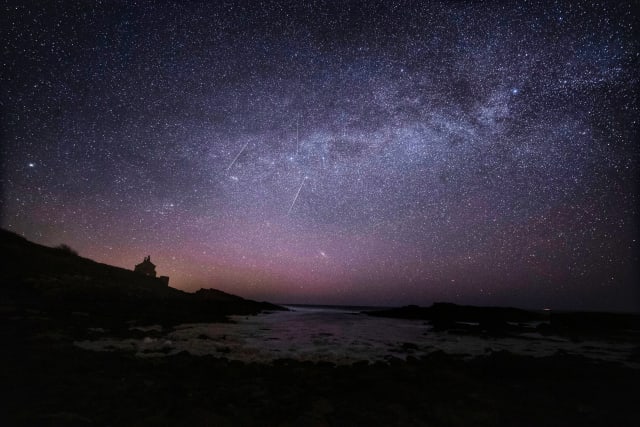 Stargazers were treated to a celestial display as the Lyrids lit up the skies on Tuesday night.

The meteor shower peaked on the night of April 21 and was visible until the early morning of April 22.

Meteor showers, or shooting stars, are caused when pieces of debris, known as meteorites, enter Earth’s atmosphere at speeds of around 43 miles per second, burning up and causing streaks of light.

The Lyrids takes its name from the constellation of Lyra the Harp, where the shooting stars appear to originate from.

The meteors are pieces of debris falling from the comet called C/1861 G1 Thatcher, which is expected to return to the inner solar system in 2276, after a 415-year orbital period.

Tania de Sales Marques, an astronomer at the Royal Observatory Greenwich, told the PA news agency: “Comets are basically dirty iceballs that heat up as the comet approaches the Sun, releasing dust and gases into space, and if the Earth, as it moves along its orbit around the Sun, encounters these clouds of dust, then we get a meteor shower.”

She told PA on Tuesday night: “We might see up to 18 meteors per hour and maybe even the occasional fireball.”

The Lyrids occur between April 16 and 25 every year. Although this year’s peak may have passed, some of the shooting stars may be visible on Wednesday evening.

The next meteor shower, the Eta Aquarids, is expected to peak between midnight and dawn on May 5-6.