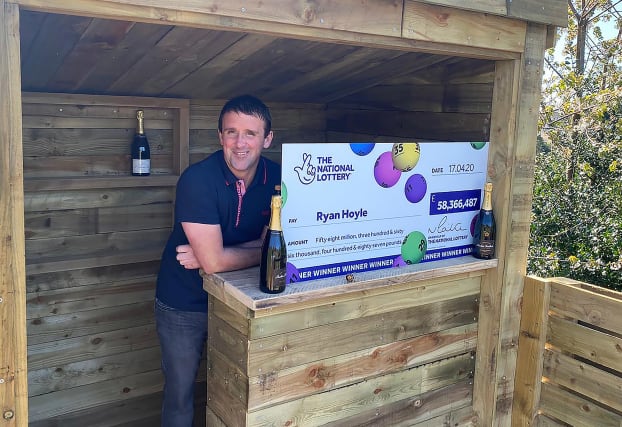 A self-employed joiner has been celebrating at a distance with his family after scooping more than £58 million on Friday's EuroMillions.

Ryan Hoyle, 38, said he plans to help his parents retire after finding himself in 20th place on the National Lottery millionaire rich-list following his jackpot win.

The father-of-one, from near Rochdale, said he initially thought he had won just £2.30 when he checked his emails at 6am on Saturday and found one from the National Lottery.

But after checking his account, he realised he had become a multi-millionaire.

He said: "I always wake up early and was sat on the edge of my bed but couldn't work out what I was looking at.

"The email linked to my account which looked like a lot of numbers and I thought it might be millions, but I couldn't believe what my eyes were seeing."

In need of a second opinion, Mr Hoyle, who has been buying tickets online during lockdown, rang his parents who assumed the early morning call was because he had locked himself out.

He added: "I was shaking and really needed a second opinion so I jumped in the van and drove round to mum and dad's house.

"I stuck to the Government guidelines and kept a safe distance outside and passed the phone through the window for them to double-check for me.

"They even checked my numbers against another website, just to be sure. It was real – I had won £58 million."

Mr Hoyle said news of his good fortune quickly spread and he was inundated with messages and texts of congratulations.

He managed to celebrate while socially distancing with his brothers, who live nearby.

"We sat apart drinking beer on Saturday afternoon in the sunshine and tried to let the news sink in," he said.

"I just couldn't be alone but we kept more than two metres apart. I needed to talk to them and ask their advice.

"It was a nice afternoon and it really helped with the shock."

Mr Hoyle said he will continue working on a refurbishment of his brother's house despite the windfall.

He said: "I'm nearly done so will see the job through. After that, who knows? Not sure I need the work at the moment."

He plans to buy himself a new car, swap his rented one-bedroom flat for a home he owns, treat himself to a Manchester United season ticket and take his 11-year-old daughter to Florida with his winnings, but said his priority will be to look after his family.

He said: "Mum works at the local school as a cleaner and has been struggling with a sore hip for years, so it would be great to see her take early retirement straight away.

"She was down for a hip replacement but all operations are on hold at the moment due to the coronavirus crisis, so maybe I can help with that too. And this win means my dad can stop working at the factory by the end of the week too.

"It's also been a tough time for one of my brothers who recently suffered a brain haemorrhage.

"He is a digger driver and was due back at work soon, so I can help him now and it means he's not forced to go back to work.

"Basically mum, dad and my brother can all retire this week."

Mr Hoyle won £58,366,487 after buying his winning ticket at www.national-lottery.co.uk.