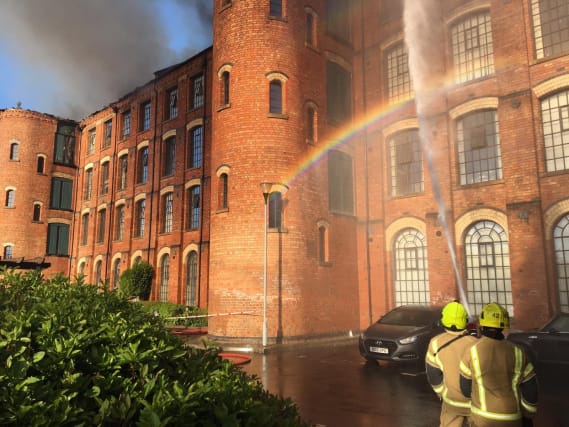 Fire crews have received no reports of casualties after a major fire which destroyed part of the roof of a former lace factory.

Crews from Derbyshire Fire and Rescue Service are still damping down “hot spots” that continue to burn at Springfield Mill in Sandiacre, after first attending on Tuesday afternoon.

The four-storey mill, which houses more than 100 apartments, dates back to 1888 and is listed by Historic England as being of special architectural interest.

Fire crews said rapid action had prevented a catastrophic fire-spread which could have led to the loss of the whole building.

The Derbyshire brigade said in a statement: “Work is continuing this morning with our emergency service colleagues, from Emergency Planning and Derbyshire Police as part of the multi-agency response to this incident.

“Bridge Street remains closed while the incident is ongoing and members of the public are asked to avoid the area and also to adhere to current Government advice in respect of Coivd-19, to stay at home except for essential journeys and not to visit the scene of the fire.”

Local residents have been told to keep their windows and doors closed due to smoke.

A joint investigation will commence later on Wednesday into the cause of the blaze, which Derbyshire’s Chief Fire Officer Gavin Tomlinson said had been made worse by high wind speeds.

Local resident Tom Walters told the PA news agency that large plumes of smoke had been billowing in the air, with debris falling below.

“It’s awful to see, especially knowing that people are now without a home at the current time,” the 29-year-old said.

Fire service area manager Clive Stanbrook said: “Thanks to the rapid and effective firefighting carried out by crews, we have been able to save at least three-quarters of the building by using fire breaks to prevent a catastrophic fire spread, which could have led to the loss of the whole building.”

Emergency services were alerted at 4.23pm and, at the height of the blaze, eight fire engines from across Derbyshire, Nottinghamshire and Leicestershire attended the incident, supported by three aerial ladder platforms, as well as command support and major incident units.