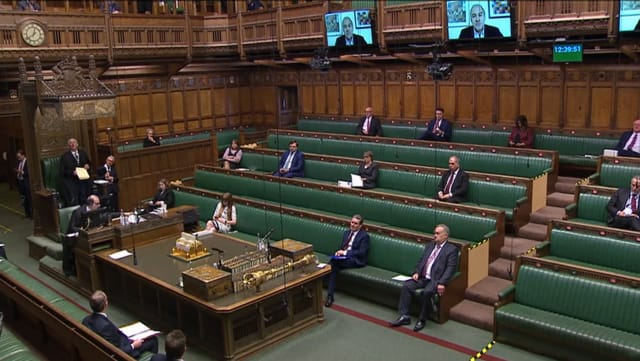 MPs have approved electronic voting for the House of Commons, although its introduction will be delayed amid concerns over how it operates.

Commons Leader Jacob Rees-Mogg said the Government has no plans to require remote voting next week when legislation is debated, adding that a committee of MPs must first look at the procedure and assess whether it is “workable” or not.

MPs have highlighted problems with trials of the new system, with concerns expressed about verifying who has cast the vote.

The temporary move to allow electronic voting means MPs would not be required to walk through the division lobbies, as part of measures taken in response to the coronavirus outbreak to limit attendance in Parliament and enforce social distancing.

Virtual proceedings in the Commons have also been extended to cover legislation, with finance measures, proposals to protect domestic abuse survivors and fire safety reforms up for discussion next week.

The extension of the virtual system comes after Commons Speaker Sir Lindsay Hoyle hailed the first day of the “hybrid” Parliament, in which up to 50 MPs were allowed to attend the chamber and up to 120 to contribute from their constituencies via Zoom.

Sir Lindsay said “almost everything has gone smoothly” but pledged to “learn lessons” after Wales questions, Prime Minister’s Questions and a Covid-19 statement from Health Secretary Matt Hancock were conducted under the new approach.

Welsh Secretary Simon Hart became the first MP to appear in the Commons virtually as he answered his departmental questions via Zoom, while Labour former minister Kevin Brennan was among those to experience technical difficulties – with parts of his question inaudible.

Extra television screens were installed in the chamber to allow MPs contributing remotely to be heard by their colleagues, while tape and signs have been used to highlight where MPs can walk and sit in the chamber.

On remote voting, Mr Rees-Mogg said it would be a temporary move as current circumstances prevent most MPs voting in person.

He added he has tested the new system, which would see votes take place over a 15-minute period unless designated as a longer deferred division, adding there will be further testing next week with MPs to “build confidence” in the new system.

Mr Rees-Mogg went on: “If this motion passes, I can confirm we will not designate any divisions as subject to these new arrangements until the committee has examined the proposed scheme and the chairman has written to me to set out the committee’s views on the scheme, and whether it considers the scheme to be workable.”

Tory former minister Karen Bradley, who chairs the Procedure Committee, said her committee supported the motion despite having concerns about temporary voting procedures which they have “not yet had chance to consider”.

For Labour, shadow Commons leader Valerie Vaz backed the change and said: “We know that we have the technology to do that because people do it for the Eurovision Song Contest and, I’m not sure the Leader of the House wants to hear this, but I think the European Parliament also operates some kind of remote electronic voting.”

“The optics of seeing votes going wrong is not where we want to be and it is certainly not the kind of House we want to present.”

Tory MP William Wragg, chairman of the Commons Public Administration and Constitutional Affairs Select Committee, said it was right for some MPs to be in the chamber to showcase good social distancing.

He said: “It is right I think that a number of members are present in the chamber able to demonstrate the same guidance that we are giving to our constituents.

“For example, those who email us frequently with their concerns about working in depots and in factories and on construction sites and it is right and proper that a number of us should be in the chamber to demonstrate social distancing in this way.”

SNP MP Pete Wishart, in a statement released outside the chamber, said: “Westminster is finally dragging itself into the present day with electronic voting – a long overdue development that will allow MPs to continue to do their job without putting the wider public at risk.

“It’s absolutely right that MPs follow the same advice that they have been stressing to their constituents – to stay at home to save lives and protect our NHS. And while these plans are currently only in place in line with social distancing measures to tackle the coronavirus crisis, it would be inconceivable for the Commons to roll back on this progress.”