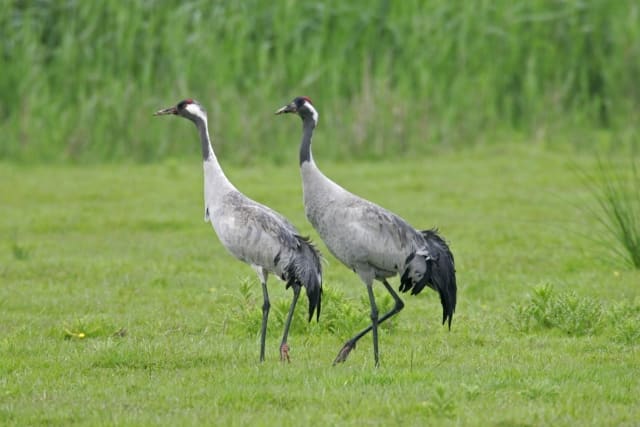 The UK’s population of cranes has reached its highest level for more than 400 years, conservationists have said.

Common cranes went extinct in the UK centuries ago but have made a return in recent years, with a few birds recolonising naturally and conservation work and a reintroduction programme helping boost numbers.

The latest common crane survey has revealed a record 56 breeding pairs in 2019, with 47 attempting to breed and successfully rearing 26 chicks, bringing the total population to an estimate of more than 200.

The elegant birds, which stand up to 130cm (more than 4ft) tall, used to be quite common in the UK and were even served up at medieval banquets.

But hunting and the loss of their wetland habitat drove them to extinction in the 1600s.

A small number of wild cranes returned to Norfolk in 1979, and work by conservation groups to improve wetland habitat for them has seen them spread to other areas of the country.

The Great Crane Project by the RSPB, Wildfowl and Wetlands Trust (WWT) and the Pensthorpe Conservation Trust, and funded by Viridor Credits Environmental Company, was started in 2010.

It works to create and improve existing habitat, as well as hand-rearing young birds for release on the Somerset Levels and Moors.

Cranes also recolonised Scotland in 2012 and Wales in 2016, while they turn up as occasional migrants in Northern Ireland but are not yet nesting there.

Damon Bridge, chairman of the UK Crane Working Group said: “The increase of cranes over the last few years shows just how resilient nature can be when given the chance.

“With the support of our wonderful partners we’ve been able to recreate more and more of the cranes’ natural habitat, giving them a place to recuperate after the winter and raise their chicks.

“They are not yet out of the woods, but their continued population climb year after year is a very positive sign.”

And Dr Geoff Hilton, from WWT, said the reintroduction of lost species had to be supported with good habitat management and protection, and thanked land managers and farmers for supporting crane conservation in Somerset.

He added: “The success of the crane project to date demonstrates what can be achieved in a short space of time by giving nature a helping hand.”