Charity worker to swim 2.6km in back garden after marathon disappointment 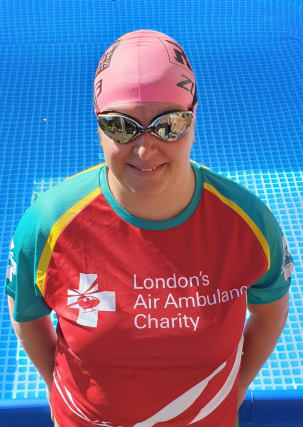 A charity worker from Romford will swim 2.6 kilometres in her back garden on Sunday to raise money for London’s Air Ambulance service.

Sophie Allen, 38, is one of hundreds of people taking part in fundraising activities to help bridge the gap left by the absence of the London marathon, which has been postponed until October.

After the announcement, which has left thousands of runners across the UK disappointed, marathon organisers set up the #twopointsixchallenge, encouraging people to take part in some form of physical activity using the numbers two and six – in reference to the length of the race.

Ms Allen, who is a challenge events manager at the London Air Ambulance Charity (LAAC), will swim non-stop in her 2×3 metre pool using a homemade tether until she reaches her target distance.

She told the PA news agency that although she had originally built the pool for her own mental and physical health, she wanted to put it to good use.

“It was quite selfish to get the swimming pool in the first place because it’s my only form of exercise at the moment and I’m quite grumpy when I can’t do any exercise,” she said.

“We got it a week ago and decided to make it into a challenge – it’s there for my sanity but also, we might as well do something good with it.

The tether, constructed by Ms Allen’s partner Tim, is made from bits of chord, elastic and a tow-float belt.

“It means that I can effectively swim on the spot,” she said.

Ms Allen estimates that the swim will take her just over an hour to complete.

“The plan is to do the equivalent of 2.6 kilometres. Obviously I can’t measure where I’m going because my watch just says I’m standing still so I’ll work out how long it would normally take me to do that sort of distance and then swim for that length of time,” she said.

“I’m not the world’s fastest swimmer, I need to do the maths.”

She added that many office and support staff at the LAAC would also be taking part in the challenge on Sunday, and that her seven-year-old son Jacob would be cheering her on from the poolside.

“There will be lots of my colleagues doing random things in their gardens or front rooms,” she said.

“[Jacob] will be cheering me on, he might finish with me, he says he wants to get in the pool at some point so I’ll see if he can do the last little bit with me but it’s a bit of a squash to get both of us in there.

“The main reason for doing it is that charities are massively missing out at the moment. Hopefully the twopointsix challenge will help us bridge the gap caused by coronavirus.”