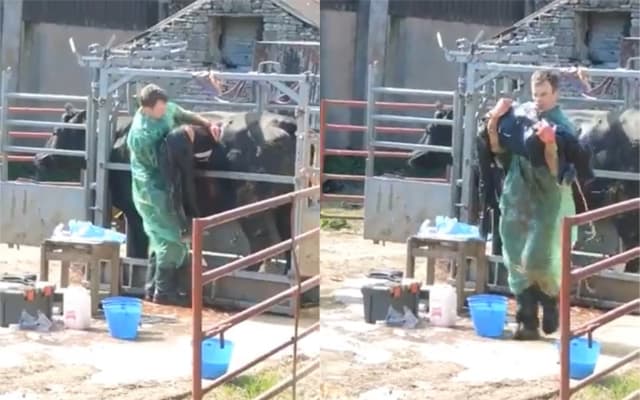 A cow and her calf are doing well after a local vet pulled off a socially distanced caesarean-section single-handed on a Cumbria farm.

Vet Richard Spooner was called to perform the procedure on Monday because the mother had a small pelvis and, according to farmer Rachel Marston, the calf “wasn’t going to be coming out the normal way”.

Ms Marston, who captured the birth on video at her Easegill Head farm in Kirkby Stephen, told the PA news agency: “It’s not uncommon – the thing that made it different was because everybody has to social distance, and normally as farmers we would help the vet get the calf out.”

Ms Marston, 43, said her parents, who are in their 70s, also live and work on the farm so they were keen to maintain social distancing if possible.

She said: “We were all kitted out with our visors and gloves and everything just in case we were needed to rush in at the last minute.

“But the vet said ‘I’ve done it before on my own, so if you put some straw where we put the straw and stand back, then we’ll see how it goes’ so that’s what we did.”

As it was, the birth went smoothly and both mother and her son were doing well on Tuesday.

“The calf was up sucking within a couple of hours and the cow was none the wiser,” Ms Marston said.

The video of the birth has been viewed more than 100,000 times on Twitter.