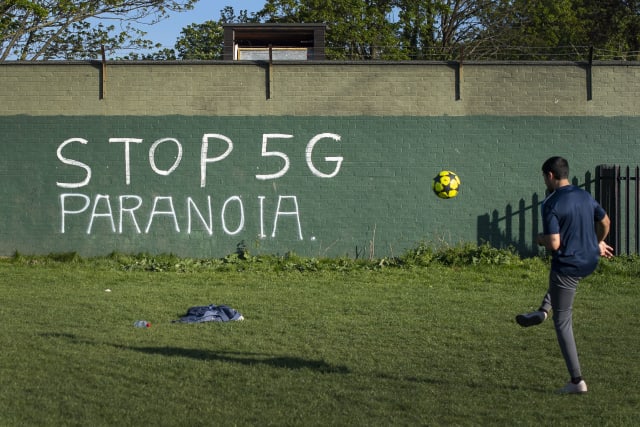 Conspiracy theories linking the origins or causes of coronavirus to 5G was the most common piece of misinformation that people came across, Ofcom’s most recent survey suggests.

Over half of Britons said they saw false information about the technology in week three of the lockdown, while other fake news related to Covid-19 appeared to be on the decrease.

It came amid a number of vandalism and fire incidents against masts across the country, with around 20 suspected attacks during the Easter weekend.

Claims that 5G is linked to the disease have been widely discredited by experts, who describe such a theory as “both a physical and biological impossibility”, with the industry branding it “utter rubbish”.

Ofcom has asked a group of around 2,000 people about their media consumption and attitudes each week since lockdown started.

Exposure to earlier falsehoods, such as the benefits of gargling with salt water or drinking more lemon juice to combat coronavirus, has fallen each week since the survey started, but 5G theories have gone from 0% in weeks one and two to 50% in week three.

Those who have seen misleading information overall about coronavirus also stands at 50%, up from 46% in week one.

However, Ofcom points out that this may be due in part to mainstream media raising awareness of certain information being false as part of their reporting of the pandemic.

People aged 16-24 are the most likely to have come across false or misleading information (59%), while it has risen among those aged 65 and over from 33% in week one to 46% in week three.

Drinking water more frequently to combat Covid-19 is now the second most prevalent misinformation respondents are reporting to have seen at 26% – down from 35% in week one.

While more than half (57%) that said they had seen misinformation did nothing about it, there appears to be a growing number using fact-checking sites over time.

During week one, 10% said they used a fact-checking site, which increased to 18% in week two, before dipping slightly in week three to 15%.

Nearly a third (32%) say they find it hard to know what is true and what is false, though the number has fallen from the 40% reported in week one.

On Monday, Ofcom said it had issued “guidance” to ITV over “ill-judged” comments made by Eamonn Holmes about the discredited theory linking coronavirus with 5G technology.

The media watchdog also imposed a sanction on ESTV over a London Live interview with conspiracy theorist David Icke about the virus.

The regulator is currently prioritising cases involving coronavirus in a bid to stop the spread of misinformation.

What do we know about the suspect in the disappearance of Madeleine McCann?