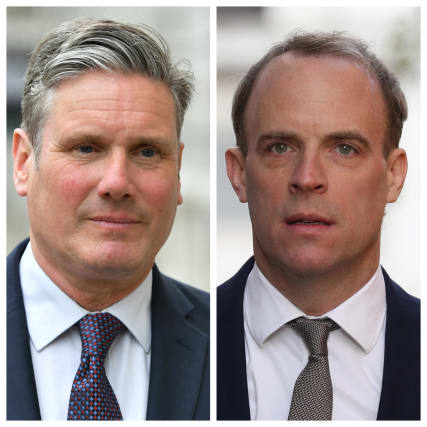 In his first PMQs as Labour leader, Sir Keir is likely to question Boris Johnson’s stand-in over testing, safety equipment for frontline workers and an exit strategy from the lockdown.

Mr Raab, who is deputising for the PM as he recovers from Covid-19, and Sir Keir will be in the House of Commons chamber among up to 50 MPs permitted to attend while obeying social distancing rules.

Some 120 more can take part remotely through the Zoom video-conferencing platform in the first PMQs since Parliament rose early a month ago because of the crisis.

As the death toll exceeded 17,000, the Government came under fire with its commitment to reach 100,000 tests per day by the end of the month appearing an ambitious hope and a lack of personal protective equipment (PPE) for health and care staff.

Health Secretary Matt Hancock said the Government is “throwing everything” at developing a coronavirus vaccine as he announced that human trials led by the University of Oxford will begin on Thursday.

Mr Hancock said it was clear that the “best way to defeat coronavirus is through a vaccine” and that “rapid progress” was being made.

Oxford, where the team is being led by Professor Sarah Gilbert, has said it hopes to have at least a million doses of its vaccine ready in September, while Imperial hopes to start clinical trials in June.

On the issue of Covid-19 testing, Mr Hancock said it was “terrific” that capacity was increasing across the UK, saying it was further ahead than the planned trajectory.

This is despite the fact less than half of the available coronavirus testing capacity has been used, with just 19,316 tests conducted in the 24 hours to 9am on Monday against capacity for 39,250.

The Government is likely to face further questions about its participation in an EU scheme to secure vital equipment after the Foreign Office’s top civil servant, Sir Simon McDonald, made an extraordinary U-turn in withdrawing his own claim that the UK did not take part because of a “political decision”.

Sir Simon wrote to the Commons foreign affairs committee to say his earlier evidence was “incorrect” and said the UK had not initially joined the scheme because of a “communication problem”, after Mr Hancock was forced to deny the earlier claim.

The Liberal Democrats have called for an independent inquiry into the Government’s response to the crisis.

Acting co-leader Sir Ed Davey accused ministers of “shocking failures” on PPE and accused the Government of a “slow response”.

– England’s deputy chief medical officer Professor Jonathan Van-Tam said Government scientific advisers were keeping the evidence on face masks for the public under review. However, he said supplies for health and social care workers must never be jeopardised

– The Department of Health said 17,337 patients have died in hospital after testing positive for coronavirus in the UK as of 5pm on Monday, up by 828 from 16,509 the day before

– A shipment of PPE – including 400,000 badly-needed surgical gowns – remains in Turkey despite the presence of an RAF plane on stand-by to bring it to the UK

– Coronavirus was linked to a third of all deaths in England and Wales in the week up to April 10, with the total number of care home deaths increasing almost six-fold in seven days to more than 1,000, according to the Office for National Statistics (ONS).