No ‘political decision’ in not joining EU Covid-19 schemes – Hancock 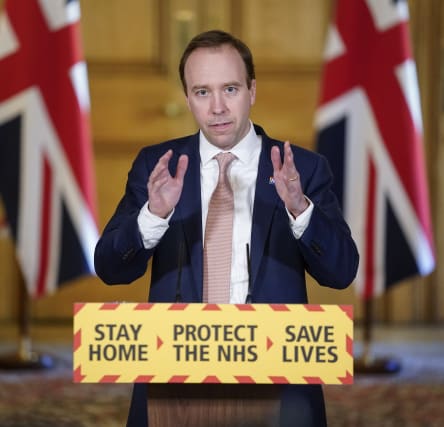 Health Secretary Matt Hancock has denied the UK took a “political decision” not to take part in European Union schemes to secure equipment to combat coronavirus.

He was forced to issue the denial after the Foreign Office’s top civil servant, Sir Simon McDonald, made the claim to the Commons foreign affairs committee on Tuesday.

However, the official later made a U-turn when he wrote to the committee to say he had been “incorrect” and reverted to the Government’s defence that the scheme was not initially joined because of a “communication problem”.

Mr Hancock had to deny that politics had been involved in the decision and said he had signed-off on joining continental efforts to procure more personal protection equipment (PPE) and ventilators.

Speaking at Downing Street’s daily Covid-19 press briefing, Mr Hancock said: “I haven’t seen that exchange but I have spoken to the Foreign Secretary (Dominic Raab) and as far as I’m aware there was no political decision not to participate in that scheme.”

“The invitation when it came in to the Department for Health – and I know there has been debate about whether it was sent to the wrong email address initially – to participate in this scheme in an associate way, because we are not members of the EU, came to me for decision and I said yes.

“It was a recommendation and I took the decision in the normal way – that’s the long and short of it.

“But the impact on our ability to deliver PPE is zero – there is no impact at all because the scheme has not yet made anything available.”

Sir Simon was asked during his appearance before the committee why the UK was not involved in EU procurement.

He said: “We left the European Union on January 31,” echoing the initial reason Downing Street gave on why Britain was not involved.

Pressed by Labour MP Chris Bryant, who later called the situation a “copper bottomed scandal”, Sir Simon added: “All I can say is, as a matter of fact, we have not taken part.”

Committee chairman Tom Tugendhat asked the Foreign Office’s permanent under-secretary whether it was a political decision by ministers.

“It was a political decision,” Sir Simon replied.

But he later wrote to the committee to say that he wanted to “clarify” that point which he called “incorrect”.

He said that “due to a misunderstanding” he had “inadvertently and wrongly” made the claim.

“Ministers were not briefed by our mission in Brussels about the scheme and a political decision was not taken on whether or not to participate,” he wrote.

The Prime Minister’s official spokesman first said: “Well, we are no longer members of the EU,” when asked why the UK was not utilising the scheme, and pointed towards other efforts to secure ventilators.

But later on March 26 Downing Street claimed there had been a “mix up” which meant emails from the EU about the procurement scheme were not received.

A Government spokesman said that “owing to an initial communication problem, the UK did not receive an invitation in time to join in four joint procurements in response to the coronavirus pandemic”.

The lack of British involvement in the schemes has led to claims that it was motivated by Brexiteer ideology in Boris Johnson’s administration – a claim denied by Downing Street.

Sir Ed Davey, acting leader of the Liberal Democrats, accused ministers of putting “lives at risk” by failing to cooperate with Brussels.

He called for the Government to be “frank” about why the deadline for being involved was “missed or deliberately passed up”.

“This Government’s evident unwillingness to work with the European Union through the current crisis is unforgivable,” said the former energy secretary.

“Time and again, the Government seem to have missed opportunities to join the EU’s procurement efforts. Lives are at risk as a result.”