Museums focus on virtual experiences as coronavirus lockdown goes on 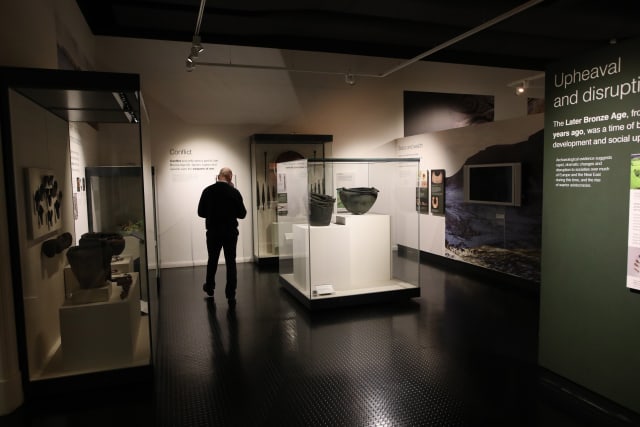 Museums across Northern Ireland have turned to online experiences as their buildings stand silent during the ongoing coronavirus lockdown.

Attractions from the Ulster Museum and Titanic Belfast to HMS Caroline and the Ulster American Folk Park in Co Tyrone have been closed since March 17 as part of social distancing measures.

The usually busy lobbies of the venues that normally see thousands of visitors are now empty but for security guards ensuring the often priceless artefacts are intact for the future.

“We’re doing quite a lot online but probably to date quite mindful that we don’t want to be just putting out content that’s gimmicky or frivolous,” he said

“We’ve been doing worthwhile, meaningful stuff with a young person’s project using the likes of Zoom and WhatsApp to engage, art therapy sessions and engagement around our fashion collections.

“We’ve got a few virtual collections opening soon, one celebrating the birth of Florence Nightingale in partnership with the Royal College of Nursing and the department of health.”

A virtual version of the Culture Lab: Don’t Believe The Stereotype exhibition featuring the infamous blackboard from Derry Girls is also being prepared.

The Ulster Museum is one of Northern Ireland’s oldest, and has not been closed to this extent since the Second World War.

“Obviously all museums are in the same position and there’s lots of comment about this being the biggest crisis to face museums since the Second World War – we haven’t seen a closure like this since then,” Mr Ward added.

The closures have left the museums without their entrance fees or donations.

“We don’t charge in to the Ulster Museum but in our three other museums we do – the Ulster Folk Museum, Ulster Transport Museum and Ulster American Folk Park,” he said.

“We’re still waiting to see the impact of that, it’s hard to tell at the moment how long this will be going on, whether we will see any form of opening during the summer, or maybe autumn.

“We have got a number of different plans and scenarios that are coming together to try and deal with it as best as we possibly can.”