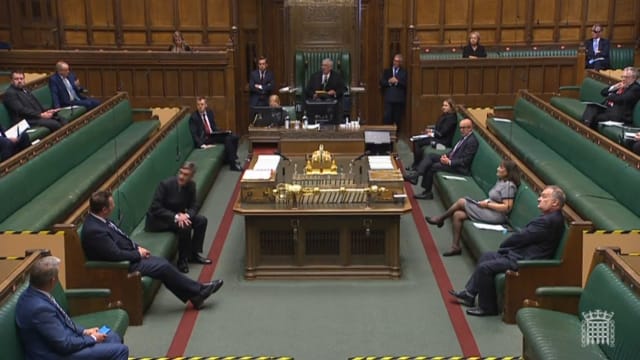 MPs have approved plans for “virtual” sittings of the Commons, as around 30 attended in person to mark the House’s return following Easter recess.

Under temporary measures drawn up by the House authorities in response to the coronavirus pandemic, MPs will be able to contribute to proceedings at Westminster – including questioning ministers – through video links.

The initial cost of development amounts to £148,793 and the running costs for maintaining the system are estimated at £369,267 per month, according to a memorandum published by House of Commons Clerk John Benger as part of his role as accounting officer.

Up to 120 MPs will be able to take part remotely through Zoom while up to 50 MPs will still be able to attend the chamber – although they have been strongly encouraged to stay away.

The new arrangements will be in place for Prime Minister’s Questions on Wednesday, with Foreign Secretary Dominic Raab standing in for Boris Johnson, and also apply to urgent questions and ministerial statements.

MPs sat physically on Tuesday to vote the “hybrid” plans through. They met for a total of 96 minutes, which included dealing with other procedural business.

Tape was on the chamber floor to mark out where MPs should walk and cards showing green ticks and red crosses denoted where they should sit in a bid to comply with social distancing rules of keeping a gap of two metres.

Commons Leader Jacob Rees-Mogg acknowledged there will be “occasions” where such rules are “not kept to absolutely perfectly” but members were making their “best effort” to ensure social distancing.

He said: “Any changes now will be temporary for the period of the lockdown, because like many things the chamber works best when members can meet in person.”

“It is at the essence of how our governmental and constitutional system works. The ability to hold the Government to account, the ability to seek redress of grievance, the ability to take up those matters brought to us by constituents so that they may be put right, is best done when this House sits.”

He also joked: “In 1349 when the Black Death affected this country, Parliament couldn’t sit and didn’t, the session was cancelled.

“Thanks to modern technology even I have moved on from 1349 and I’m glad to say that we can sit to carry out these fundamental constitutional functions. And I’m enormously grateful to many who are just as traditionalist as I am, who have accepted these constraints.”

MPs heard a rehearsal for remote voting had not gone perfectly, with Conservative former minister Karen Bradley noting: “Some others have tried the trial run of it and can’t say it was absolutely brilliant. A lot more work will need to be done.”

Commons Speaker Sir Lindsay Hoyle confirmed no decision has yet been taken with regards to voting and that any considerations “will be completely checked” before being implemented.

“We want to check that that is secure, and that is the key for every member’s worry, that this House, when they’re voting, that it is the person who they say they are.

“So we must look at that very seriously and that will be completely checked before we do something that wouldn’t be secure.”

Labour former minister John Spellar said the Commons has to be the “epicentre of the democratic system” and its role scaled-up in the coming weeks to ensure questions are answered by ministers, adding: “Otherwise what is the point of Parliament?”

Tory former minister Sir Desmond Swayne said it would be “outrageous” if MPs were excluded from debates.

DUP MP Jim Shannon (Strangford) said that he only learned how to send a text message two years ago, having raised concerns regarding MPs who are less certain of using the technology introduced.

He said: “I also want to underline the point, and I say this with all humbleness Mr Speaker, I’m not technically minded and have just learned how to text about two years ago.”

Experts from the National Cyber Security Centre have advised that the use of Zoom will be appropriate as long as the application’s use is carefully managed.

A number of screens have been placed around the Commons chamber to allow the Speaker and MPs in Westminster to be able to see their homeworking colleagues.

MPs who wish to participate in proceedings will need to notify the House Service in advance and there will be a list of those chosen and the planned order in which they will be called.

Backbenchers will, as usual, be drawn at random, although the Speaker will ensure opposition spokesmen and women and the relevant select committee heads are able to take part.