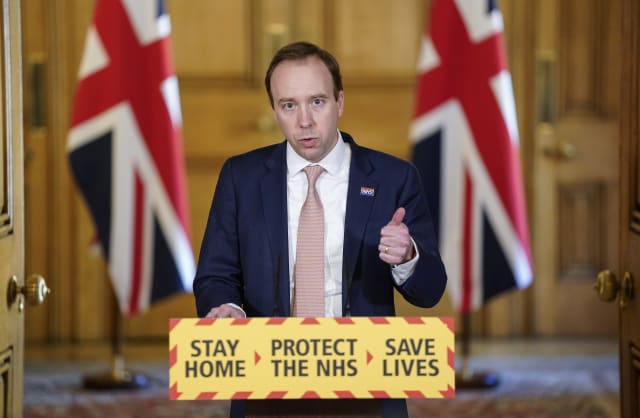 The Government is “throwing everything” at developing a coronavirus vaccine, Health Secretary Matt Hancock has said as he announced that human trials led by the University of Oxford will begin this Thursday.

Mr Hancock, who is under fire over his 100,000-per-day testing target and a lack of protective equipment for health and care staff, said it was clear that the “best way to defeat coronavirus is through a vaccine”.

Speaking at the daily press briefing, Mr Hancock praised the “rapid progress” being made into vaccines by scientists at Oxford and Imperial College London.

Oxford, where the team is being led by Professor Sarah Gilbert, has said it hopes to have at least a million doses of its vaccine ready in September, while Imperial hopes to start clinical trials in June.

Mr Hancock said the UK is at the “front of the global effort” to find a vaccine that is effective against coronavirus.

“We have put more money than any other country into a global search for a vaccine and, for all the efforts around the world, two of the leading vaccine developments are taking place here at home – at Oxford and Imperial,” he said.

“Both of these promising projects are making rapid progress and I’ve told the scientists leading them we will do everything in our power to support.”

Mr Hancock pledged a further £22.5 million to Imperial, while Oxford will be granted £20 million to fund its clinical trials.

Mr Hancock said the process of finding a vaccine would involve “trial and error” but he has told UK scientists he would “back them to the hilt and give them every resource they need” to succeed.

“After all, the upside of being the first country in the world to develop a successful vaccine is so huge that I am throwing everything at it,” he said.

On the issue of Covid-19 testing, Mr Hancock said it was “terrific” that capacity was increasing across the UK, saying it was further ahead than the planned trajectory.

This is despite the fact less than half of the available coronavirus testing capacity has been used, with just 19,316 tests conducted in the 24 hours to 9am on Monday against capacity for 39,250.

Mr Hancock said testing of NHS staff who are not showing coronavirus symptoms will play a part in reaching the Government’s 100,000 target.

And he said home testing was being rolled out for staff and could be useful for those living in care homes.

Professor John Newton, national co-ordinator of the UK coronavirus testing programme, acknowledged that health and care workers have struggled to access testing sites, which include drive-through centres placed out of town.

He said home tests for coronavirus that can be sent back should be available to NHS staff across the UK “very soon”, while mobile deliveries was another option being piloted.

– England’s deputy chief medical officer Professor Jonathan Van-Tam said Government scientific advisers were keeping the evidence on face masks for the public under review. However, he said supplies for health and social care workers must never be jeopardised.

– The Department of Health said 17,337 patients have died in hospital after testing positive for coronavirus in the UK as of 5pm on Monday, up by 828 from 16,509 the day before.

– A shipment of personal protective equipment (PPE) – including 400,000 badly-needed surgical gowns – remains in Turkey despite the presence of an RAF plane on stand-by to bring it to the UK.

– Coronavirus was linked to a third of all deaths in England and Wales in the week up to April 10, with the total number of care home deaths increasing almost six-fold in seven days to more than 1,000, according to the Office for National Statistics (ONS)

– Veteran fundraiser Captain Tom Moore has thanked the NHS for doing “such a magnificent job” as he opened a new Nightingale hospital in his native Yorkshire.

– Nazanin Zaghari-Ratcliffe’s temporary release from an Iranian jail has been extended for one month.

– Boris Johnson told Donald Trump he is “feeling better and on the road to recovery”, the White House said after a call between the Prime Minister and US president.

Looking at where the UK is in the epidemic, Prof Van-Tam told reporters that new case numbers “remain high and it isn’t clear that there’s an enormous downturn at this point”.

He said the country remains “in a situation of danger that we must take very seriously indeed”.

While hospital admissions had peaked in London on around April 10 “and since then there has been a decline”, the picture in Scotland, Wales and other regions in England showed “more of a plateau rater than anything else”.

Prof Van-Tam said it was not “absolutely clear” there had been peaks or that cases were dropping in these areas, adding: “It shows that we are not out of danger at this point, and that the curve is flat but not very clearly going down in many parts of the country.”

Mr Hancock said the fact some people shed the virus and transmit it to others before they display symptoms made it “incredibly difficult to deal with”.

Prof Van-Tam said such asymptomatic people could be picked up with the current test and those with symptoms were still the major force driving transmission.