Gamekeepers warned to be ‘extra wary’ during lockdown 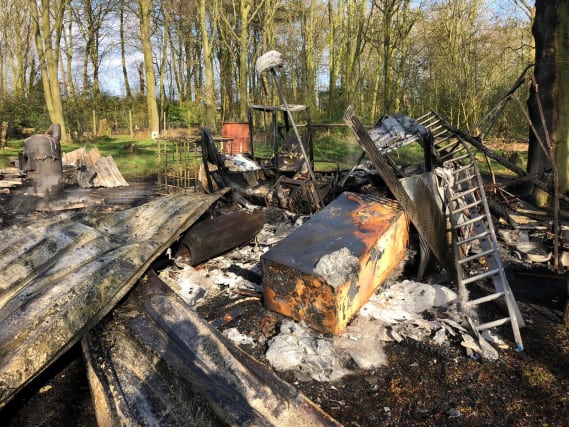 Fisheries and shooting estates have been urged to be “extra wary” amid reports of increased poaching and attacks on shoots during the lockdown.

The Scottish Gamekeepers Association (SGA) warning follows what members believe was a deliberate attack on a woodland pheasant shoot, causing more than £30,000 worth of damage.

SGA member Bryan Carman said the Bellefield shoot, his shooting syndicate operation based in Warrington, Cheshire, has been burned down.

Power generators, chainsaws, pheasant feeders and other tools were destroyed in the woodland blaze on Wednesday April 15, along with four wooden cabins.

Mr Carman said: “We are a bunch of working blokes who have put years of our lives into building up the shoot from scratch. Now all that is left is ashes.

“It might not seem a lot to some folk but to us the shoot was a little sanctuary.

“They’ve taken advantage of the fact that people are not on the ground because of the lockdown.

“It wasn’t theft, either, they’ve just set fire to everything then left.”

He added: “I contacted the SGA – as we are members – to warn others that people might take advantage during this time.

“We wouldn’t want the same thing happening to others. We are all absolutely devastated.”

Elsewhere, Kinross Trout Fishery near Balado, Perth and Kinross, reported a spike in poaching since closure under the lockdown rules and is using CCTV cameras to monitor the property remotely.

Earlier this month, police in the Scottish Borders said two men, aged 38 and 32, were arrested and reported to the procurator fiscal in connection with allegations of illegal fishing.

Wildlife officer Constable Steven Irvine said the force believes poachers may be “taking advantage of our rivers being quieter than normal due to the current restrictions on travel and the limited amount of time people should be spending outdoors to help ease the pressure on the NHS and save lives”.

He stressed fishing is “not an essential reason for people to be leaving their homes”.

Mr Irvine also warned people walking as part of their daily exercise not to tamper with cage traps on hillsides.

SGA chairman Alex Hogg  said a high seat – equipment used to give a vantage point for shoots – was vandalised on Portmore Estate in the Borders where he works as the number of people accessing estate ground has quadrupled.

He said there is a fear anti-field sports campaigners and poachers will be emboldened by lockdown, with fewer people monitoring the ground.

Mr Hogg said: “Sporting estates were already living with legal traps and property being vandalised by people opposed to shooting.

“What happened to our members in Warrington last week has been absolutely soul-destroying for them.

“There’s enough to be worrying about just now without things like this but everyone should be extra wary during lockdown.”