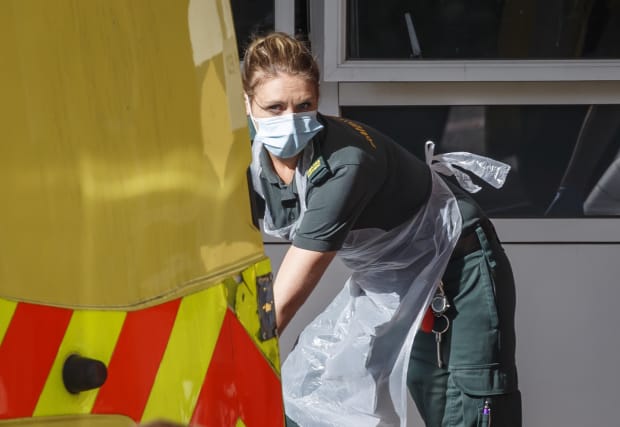 Dentists and anaesthetists are among the latest groups to say they are working without adequate personal protective equipment (PPE) in the fight against Covid-19.

The British Dental Association (BDA) said dentists in England are facing “critical shortages” of PPE, while the Royal College of Anaesthetists (RCA) said doctors should not treat patients without proper equipment.

Over half (54%) of dentists in England said PPE shortages are hampering efforts to treat patients at urgent dental care (UDC) hubs, according to a survey of 1,010 UK dentists by the BDA.

Only one in five dentists in Scotland are reporting the same issues, the poll found.

The BDA said a lack of PPE has meant some UDC hubs cannot currently treat patients.

It says a third of the sites in England remain inactive, compared with just 2% across Scotland, Wales and Northern Ireland.

BDA chairman Mick Armstrong said: “Many dentists have been redeployed, only to find their hands tied by a critical shortage of kit, and delays in training and fit-testing.

“Patients are taking matters into their own hands, while desperate colleagues shop around for Scuba gear in a bid to keep themselves safe. It is time for a genuinely national effort to get PPE to the NHS front line.”

The RCA’s president Professor Ravi Mahajan said members should not risk their safety to provide care for coronavirus victims.

He said if an anaesthetist tries “their best to acquire and use effective PPE but, having made all the efforts they reasonably can, are forced to conclude that the risk to their own health is unacceptable and that they cannot treat a patient, the Royal College of Anaesthetists will offer them its support”.

It comes as Labour MP Rachel Reeves said UK firms offering to make PPE for health workers have heard “nothing back” from the Government.

Ms Reeves tweeted a copy of a letter she sent to Cabinet minister Michael Gove on Saturday expressing concern about PPE shortages and asking how many UK firms had been taken up on their offers to manufacture it.

Speaking on Tuesday on BBC Radio 4’s Today programme, MS Reeves said she had been “inundated” with requests from manufacturers to make PPE.

“There are many, many businesses around the country who have perhaps furloughed workers but have the capability and the capacity and the skills to make this personal protective equipment and clothing – particularly the gowns – but have not heard back from the Government,” she said.

“Some of them are doing it on an ad-hoc basis for local hospitals or care homes, but this needs to be systematic – it needs to be a national effort, using all of our manufacturing and textile capacity and capability to ensure that the doctors and nurses and care workers … have that equipment and clothing that they need.”

She said there had been “too much focus” on importing PPE from overseas and that there had not been enough focus on bringing smaller suppliers into the national effort.

“It is a disgrace that we’ve got people working on the front line who aren’t properly protected and Government’s first and foremost responsibility is to protect its citizens, and this now is our main priority.”

It comes after a hospital doctors’ union said officials responsible for the UK’s “disgraceful” lack of adequate PPE needed to be held “fully accountable for their abject failure” to protect front line health staff.

Employers will now be able to use new official guidance on reusing items or wearing different kit to “coerce health workers … to risk their own lives when caring for Covid-19 patients”, said HCSA president Claudia Paoloni.

The criticism comes after the Government appointed London 2012 Olympics chief executive Paul Deighton to “unleash the potential of UK industry to scale up domestic PPE manufacturing”.

Virgin Atlantic said that, since April 3, it has sent five flights to fetch 80 tonnes of PPE from overseas.

Two further flights will arrive from Shanghai this week, it said.