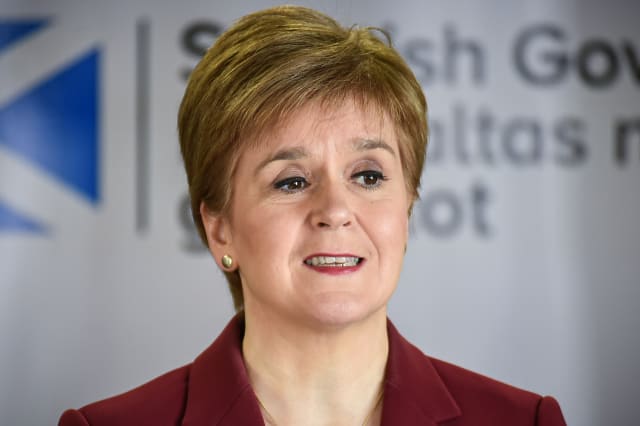 Covid-19 has resulted in an “economic crisis” in Scotland, the First Minister said as she announced the number of people who have died after testing positive for the disease is now 985.

Nicola Sturgeon spoke after a new report from the Scottish Government’s chief economist warned of an “unprecedented” drop of up to 33% of GDP – but she insisted this was no reason for the country to end its lockdown early.

The report from Gary Gillespie showed that 110,000 new claims for Universal Credit in Scotland had been filed since March 15 – with Ms Sturgeon saying this was up from 15,500 in the same period last year.

Meanwhile, the oil and gas sector – a key part of Scotland’s economy – has been hit by plunging prices

On Tuesday, the price of a barrel of Brent crude oil dropped more than 29% to 19.82 US dollars per barrel, its lowest level since 1999.

Ms Sturgeon, speaking at her daily briefing at the Scottish Government’s HQ in Edinburgh, said: “Dealing with this public health emergency has in itself created an economic emergency.”

The latest Scottish Government figures show the number of laboratory confirmed coronavirus deaths in Scotland was up 70 on Monday’s figure to a total of 985.

However, she said that in order to support measures to protect public health and curb the spread of the virus, the Government was making “extraordinary demands on businesses” – with ministers having put a £2.3 billion package of support in place.

The chief economist estimated around 22% of economic activity in Scotland has been closed down as a result of the pandemic – with this affecting more than 900,000 jobs.

And Ms Sturgeon cautioned that there could be a “significant increase” in unemployment in the future.

The First Minister is due to publish the factors that ministers will take into account when considering how long the lockdown needs to be extended for later this week.

But she stressed: “The economic harm being caused by this virus is not in itself a reason to come out of lockdown early.

“Indeed, dealing with this public health emergency and continuing to suppress the virus is an absolute prerequisite for a sustainable economic recovery.

“If we were to move out of lockdown too early and then have to impose the same level of restrictions again, due to a further rapid rise in cases, that would in itself cause further and possibly much longer lasting economic damage.”

She added: “These are decisions we have to strike the right balance on for the good of the country overall.”

That message was echoed by the chief economist, who said the country’s economic recovery would be linked to the public health response to the pandemic.

“We need to plan our recovery alongside our health effort to support the safe and sustainable return of the economy,” he said.

“The worst thing we can do is lift the restrictions too quickly and end up with a further collapse in demand and other restrictions coming back on.”

Mr Gillespie said while the situation businesses were facing was unprecedented, he added that “the scale of the response is there also, and we can get through this and recover”.

He also said Scotland’s oil and gas sector was “resilient”, adding that “with some support” it could “see through this”.