Brent oil collapses after rout in US oil markets 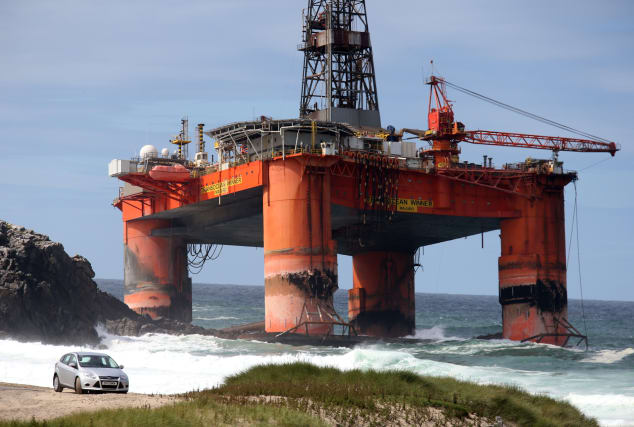 A rout in global oil markets continued on Tuesday, as traders in Europe caught up with extraordinary events in the US on Monday evening.

It came the day after oil prices in the US briefly dipped into negative territory, meaning that buyers were being paid up to 40.32 dollars to take delivery of oil.

Demand for oil has dried up as international economies shut down to slow the spread of coronavirus.

This has meant that storage sites across the world have been filling up.

On Monday, storage had become so scarce in Texas that producers were paying buyers to take May deliveries of West Texas Intermediate (WTI) oil off their hands.

WTI is the most commonly used US standard for oil.

“We’ve had too much supply and too little demand for an extended period of time, and all of the oil storage capacity is currently in use,” said Rachel Winter at Killik & Co, an investment company.

She added: “Nobody wants to take delivery of oil next month because there’s nowhere to store it, so the price has dropped below zero.”

Contracts for Brent crude oil to be delivered, which had dropped on Monday, continued their fall on Tuesday.

However, Paul Danis at Brewin Dolphin, an involvement management firm, said that negative prices were not the new normal.

“Yesterday’s crazy move was not reflective of the true, albeit grim reality in the oil market,” he said.

The volatility in oil markets heaped pressure on the stock markets on Tuesday, sending the FTSE 100 down by 1.6% to 5718.91 points.

“Mining stocks were very much out of favour on Tuesday, dragging the FTSE 100 down,” said Russ Mould, investment director at AJ Bell.

“BHP, Evraz and Anglo American all fell by more than 5%, alongside similar weakness in oil producers Royal Dutch Shell and BP as the market worried about commodities demand.”