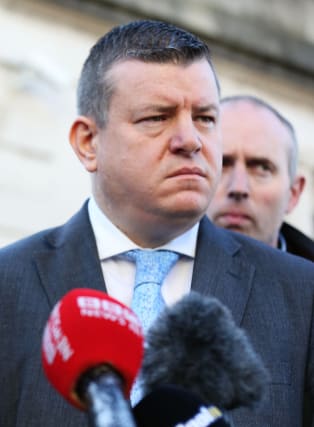 A high-profile Belfast lawyer has said he was put on a ventilator within an hour of arriving at hospital with coronavirus.

Anybody on a ventilator with the infection stands just over a 50% chance of surviving, medics have said.

He became unwell after returning from speaking at a St Patrick’s Day event in New York last month.

Twelve days later he was coughing and had trouble breathing and was admitted to hospital.

He told the Detail website: “I have never been sick before or in hospital other than sports injuries and the children being born so I haven’t had any real appreciation of what goes on in hospitals.

“I do now. When you are in ICU you’re totally incapacitated and everything is managed by staff.

“The dignity that they restore in the patient, every patient, is both humbling and inspiring.”

He praised NHS workers, saying: “As a society we should be ashamed of ourselves as to how we treat and resource the NHS.

“These people are the equivalent of the firemen who rushed into the Twin Towers on 9/11 yet we have asked them to confront this crisis with insufficient personal protection equipment. That’s a disgrace.”

Mr Murphy has been involved in a number of high-profile cases.

He worked on the trial of a man accused but later cleared of the murder of British soldiers outside Antrim’s Massereene Army base in 2009.

He also represents many families bereaved as a result of alleged state collusion with paramilitaries during the Northern Ireland conflict, including the Loughinisland pub shootings.

Mr Murphy is a representative of Ireland’s Future, a civic nationalism group aiming to promote discussion about a united Ireland in the context of Brexit.

He is also a member of the board of directors for the campaign group Relatives for Justice.