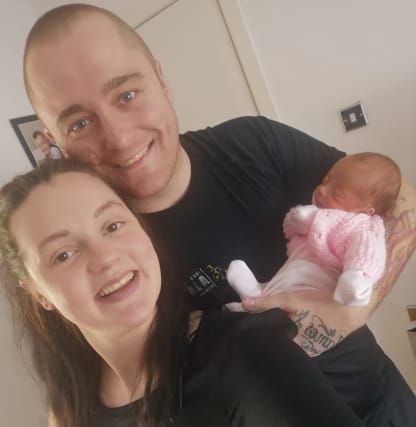 A three-week-old girl who was believed to be Scotland’s youngest coronavirus patient has recovered from the virus to the delight of her parents and the medical team who cared for her.

Peyton Maguire was born eight weeks premature on March 26 and was delivered by C-section at University Hospital Wishaw after mother Tracy was diagnosed with pre-eclampsia.

After being cared for in an incubator in the neonatal unit, the 3lb 11oz baby tested positive for Covid-19 on April 15 – despite not having any symptoms.

On Monday, after two negative tests, Peyton has now been allowed to leave the hospital with her parents.

Mrs Maguire said: “When I heard Peyton had coronavirus I was sobbing and really worried about how it could affect her respiratory system, her lungs and if it was life-threatening.

“She’d had a sniffle, which is why they’d tested her for a range of viruses including Covid-19.

“We were told we’d have to stay away from Peyton for 14 days and isolate at home but I pleaded not to be apart from my baby for that long.

“The staff kindly agreed I could to isolate with her in the hospital while AJ stayed at home.”

She added: “Watching the staff at work was incredible.

“They put their lives at risk to make sure my baby was getting fed and cuddled.

“Even wearing their PPE, they were determined to hold her.

“Peyton is the most precious person in the world to me and it shows the trust I had in the midwives and the other staff that I put her care in their hands – because that is that they are trained to do.”

Peyton is now back at home in Bellshill, North Lanarkshire, with her 27-year-old mother – a digital marketing student – and 28-year-old father AJ, who works as a personal trainer and boxing coach.

Mrs Maguire now hopes their story can reassure other prospective parents who may need to visit hospitals in the near future.

She added: “My message to any mums-to-be is that they shouldn’t be worried about going into hospital to give birth because the staff know exactly what they need to do to protect everyone from the virus.

“And if people have symptoms of a serious health problem, like I did, they shouldn’t be scared to go to hospital and get checked out because just leaving it could make their condition worse.

“Only someone who has been in our position can understand the gratitude we feel towards the hospital staff.”

NHS Lanarkshire chief midwife Cheryl Clark said: “We’re delighted that the fantastic care Peyton has received from our staff has meant she is well enough to go home, allowing AJ to be reunited with his wife and daughter.”