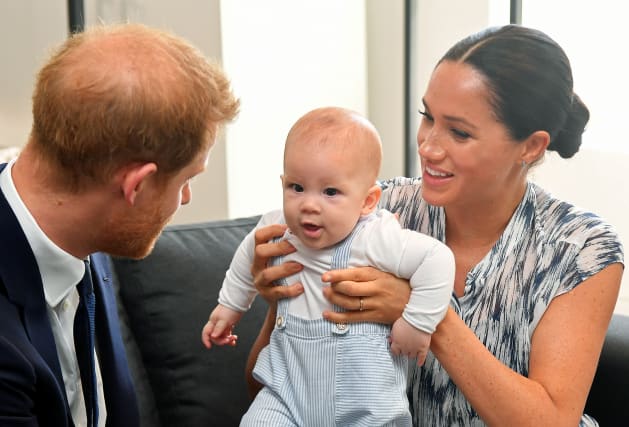 The Duke and Duchess of Sussex's baby son Archie Mountbatten-Windsor joined in with a video call to his great-grandmother the Queen on her 94th birthday.

Harry and Meghan, who are thousands of miles away living in Los Angeles after quitting as working royals, spoke with the monarch, who is marking the occasion at Windsor Castle, away from her family, while the country is in lockdown.

Archie, who turns one in a fortnight, was with his parents as they delivered their birthday wishes.

With the Sussexes eight hours behind because of the time difference between the west coast of America and the UK, they contacted the Queen later in the day.

The royal family shared touching private family footage of the Queen as a carefree young princess to mark the monarch's birthday.

Behind-the-scenes archive film from the Royal Collection Trust shows Princess Elizabeth playing with a pram as a toddler, as a happy young girl on a seesaw, and skipping and jumping around a garden with her younger sister, Princess Margaret.

It also shows her delight as she sits on a horse, and she is seen dancing on a yacht with Margaret, in matching outfits, as they learn dance steps from their mother, Queen Elizabeth.

The royal family's Twitter account said: "To those of you also celebrating your birthdays today at home, with or without your loved ones – we send you many happy returns."

It thanked the public for its birthday messages and wished the Queen a happy birthday.

The Queen is with her husband of 72 years, the Duke of Edinburgh, at Windsor with a reduced household for their protection.

Like the rest of the nation, the royals are staying away from one another as they follow the social distancing rules amid the coronavirus pandemic.

Other family members will have also telephoned and video-called the Queen privately to deliver their birthday messages.

The Duke and Duchess of Cambridge are at Anmer Hall in Norfolk with their children, Prince George, Princess Charlotte and Prince Louis.

They wished the monarch a happy birthday alongside a picture of William and Kate showing the Queen around the duchess's garden at the Chelsea Flower Show last year.

The Prince of Wales and the Duchess of Cornwall's Twitter account also sent birthday wishes, with a collection of touching archive photos of Charles and his mother.

Charles, who has recovered from the Covid-19 illness, is at Birkhall in Aberdeenshire, Scotland, with Camilla.

The Princess Royal, the Duke of York and the Earl of Wessex are all in their own separate homes around the country.

The bells of Westminster Abbey – the church where the Queen was married and crowned – stayed silent on her birthday for the first time in more than a decade, and there were no gun salutes in central London, at the Queen's request, for what was believed to be the first time.

Images included rows of delicately decorated cakes with pale pink, yellow and lilac royal icing each adorned with an EIIR cypher, golden crown or a rose.

The recipe makes 15 cakes and the secret ingredients include 15g of vinegar and 100g of white chocolate chips.