Wildlife returns to moorland scorched by fire a year ago 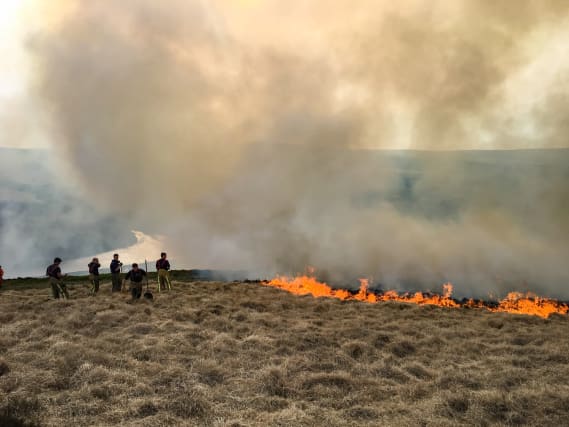 Wildlife including short-eared owls, curlews and mountain hares have returned to moorland devastated by fire a year ago, the National Trust said.

Some 700 hectares (1,730 acres) of peatland habitat on Marsden Moor in West Yorkshire were scorched and destroyed in April 2019 by a blaze, started by a disposable barbecue, which took fire crews four days to put out.

The National Trust said staff had worked over the winter to repair the habitat for wildlife and to put in measures to prevent future fires spreading, helped by £100,000 from a public fundraising appeal.

Recent sightings of rare birds that nest on the ground, such as curlew and skylarks, as well as mountain hares spotted over the winter have raised hopes for rangers who feared entire populations may have been wiped out.

But the Trust warned that the threat of fire to important habitat remains and is urging the public and landowners to take care amid the dry weather and at a time when fire services are stretched by coronavirus.

Fire services have already issued warnings to members of the public to take care if exercising on moors and for landowners not to carry out controlled burning, often used on grouse moors to boost conditions for red grouse.

A warning from West Yorkshire Fire and Rescue Service came after a blaze last month at Marsden which was thought to have been started by controlled burning.

The National Trust said that, in the last month alone, three separate fires have broken out on or near the South Pennines site.

To defend against wildfires, the Trust said it had used measures to “re-wet” the peat to curb fires and help tackle climate change by ensuring the peatland soils are storing carbon.

Rangers and volunteers have planted tens of thousands of sphagnum moss plugs and built leaky dams to hold water on the moor, and cut vegetation breaks near car parks and alongside roads, to stop fire from spreading.

Tom Harman, lead ranger at Marsden Moor, said: “It’s really positive to see wildlife returning to Marsden Moor after everything that happened last year. Many hands made it happen and they have worked so hard.

“But while the landscape might appear to have recovered, it’s just one kind of grass that has grown back – no heather, no moss, no flowers.”

And he said: “After several smaller fires already this spring, we know the risk of another big fire hasn’t gone away.

“We lost 700 hectares of important habitat last year, and I don’t think our birds and animals could withstand another loss on that scale.”

He added: “It’s vital that, at this time of national crisis, we take pressure off the fire service, who are trying to focus on supporting the NHS and vulnerable people.”

He said the Trust is urging people to stay at home, but to be extra vigilant if they do have to go to the area for an essential journey, warning that even a cigarette dropped out of a car window can have a “catastrophic impact”.

Since last year’s blaze, the Trust has helped local councils enforce a barbecue ban on the open moors and continues to raise public awareness with Yorkshire Water, Moors For The Future and West Yorkshire Fire and Rescue Service.