What the papers say – April 21 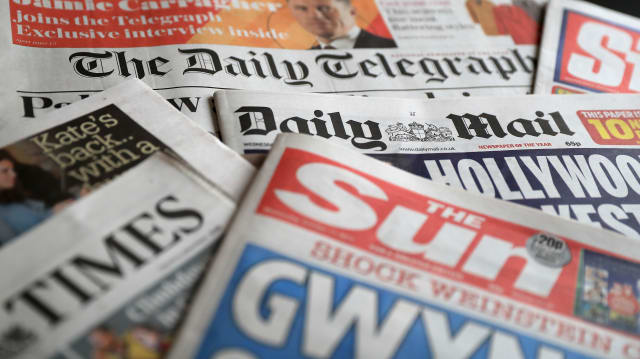 Issues around the acquisition of masks, gowns and gloves to protect against coronavirus lead many of Tuesday’s national papers.

But the Daily Star says the call by 100 of the country’s top doctors for people to wear a mask whenever outside could result in the country becoming “Zorronation Street”.

Metro reports the virus has killed “at least 100 health and social care workers” and the i says NHS medics have asked the Government to “save our staff” by providing sufficient PPE.

The head of the Royal College of Anaesthetists has told The Independent that doctors “should not treat patients if they don’t have the protective equipment they need to keep them safe”.

Ministers have been “warned of exponential rise in fatalities” if lockdown measures are eased, according to The Guardian.

The Daily Telegraph reports on a potential rift within Cabinet as it says Number 10 “casts doubt” over Health Secretary Matt Hancock’s “arbitrary” pledge to test 100,000 people per day for the virus.

The Daily Express calls for extra support for the families of NHS “care heroes” who lost their lives after testing positive to Covid-19.

Photographs of empty virus testing sites in Manchester, Cardiff and Brighton feature on the front of the Daily Mirror, which calls the Government’s efforts a “failure”, while the Daily Mail says the head of intelligence agency GCHQ has warned families face a “Plague of virus web scammers”.

The Sun praises the “Grand Bold Duke” of Edinburgh for his expression of gratitude to NHS workers, which the paper says took place as his “grandson Harry moaned in Los Angeles about the press”.

And the Financial Times reports the US oil price has gone negative “as coronavirus shatters demand”.