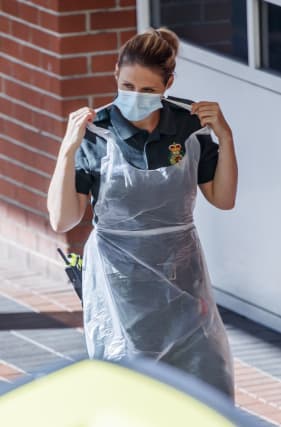 Health care workers in Northern Ireland have expressed alarm over official coronavirus guidance in England and warned the Stormont authorities not to adopt it.

Public Health England said where there are acute shortages and it is safe to do so, it approves the re-use of personal protective equipment.

The Department of Health said the guidance “is not implemented in Northern Ireland at this point”.

Anne Speed, Unison’s head of representation in Northern Ireland, said: “This is an extremely alarming guidance that has been developed by Public Health England.

“Unison wrote to the Department of Health on April 18 on behalf of all health unions indicating that we will not accept Northern Ireland adhering to this revised guidance.

“We have been advised by the Department that the guidance is not being implemented in Northern Ireland at this point, though we remain concerned that the department has not definitively ruled out issuing such guidance in future.

“The priority must be delivering the personal protective equipment that is required for all workers, not only in hospitals, but also in nursing homes and in the community.”

Public Health England has said any clinician working in a hospital, primary care or community care setting within two metres of a suspected or confirmed coronavirus Covid-19 patient should wear an apron, gloves, surgical mask and eye protection, based on the risk.

It added: “In some circumstances PPE, particularly masks and eye protection which is there to protect the health and care worker, can be worn for an entire session and doesn’t need to be changed between patients, as long as it is safe to do so.

Around 250,000 gowns have been transferred from Northern Ireland to England, on the basis that they will be resupplied once England’s stocks arrive.

Ms Speed added: “Given this new guidance from Public Health England, we are seriously questioning when this will happen.

“We are demanding transparency over the status of our personal protective equipment stockpile.”

The debate over such equipment has continued for weeks in Northern Ireland.

Questions have surrounded a failed bid to secure kit from China as well as the speed with which millions of pieces of equipment from the rest of the UK has been distributed.

Ms Speed said: “The Minister for Health must publicly reassure all health and social care workers that this guidance will not be adopted for Northern Ireland in the future.

“There must be full engagement on any proposed future guidance. Unison will not accept decisions that affect our members being made over our heads.”

Some hospitals in England, particularly London, are hard-pressed by the number of coronavirus cases coming through.

A statement from Stormont’s health department said: “This guidance on the re-use of PPE is not implemented in Northern Ireland at this point, and if or when it might be required the department will consider this taking account of the national and scientific evidence and will provide further advice at the appropriate time.

“Such consideration will be undertaken if required, and only following full engagement and in consultation with professional bodies and trade union representative organisations.”

Further guidance will be issued shortly through the Public Health Agency in Belfast on the re-use of suitable visors and goggles in Northern Ireland.