Children take part in over 250,000 lessons on first day of virtual school 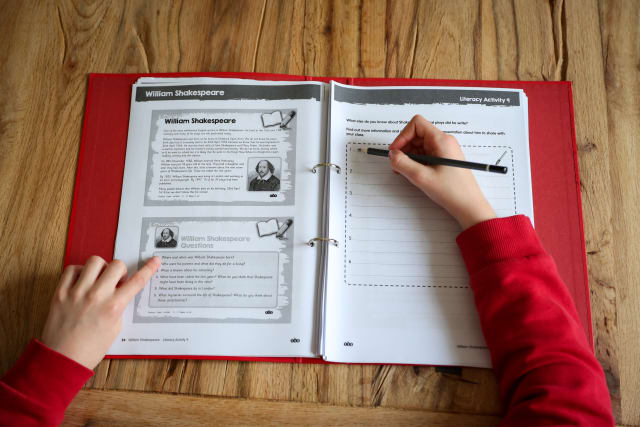 Over a quarter of a million online lessons have been accessed by children on what would have been the first day back at school after the Easter break.

The Oak National Academy, a Government-backed virtual school which was created by 40 teachers in England in less than a fortnight, launched on Monday for pupils in Reception to Year 10.

More than 250,000 video lessons were streamed online by pupils across the UK on the first day of the virtual academy.

It came as a survey by Sutton Trust revealed that over half of students in independent schools take part in online lessons every day, two-and-a-half times as often as their state school peers.

The gap is largely explained by access to resources, as independent schools are more likely to have existing online platforms where they can broadcast classes online to their students.

Matt Hood, principal of Oak National Academy, which will offer pupils 180 free video lessons a week, said he was not surprised by the findings as he warned that the attainment gap could be “exacerbated” by varied access to digital devices and broadband amid the crisis.

He told the PA news agency: “Our contribution to that is making good quality resources available to any teachers who need it, who can then in turn make them available to their pupils.”

The launch of the virtual school is part of a Government push to make remote education accessible for children while schools are closed to most pupils amid the Covid-19 pandemic.

The Department for Education has also announced that it will provide free laptops or tablets to some deprived Year 10 pupils to help them learn at home.

It came as schools in England would normally be opening their doors for the summer term but they remain closed, apart from to children of critical workers as well as vulnerable pupils.

Speaking to PA as the online school was launched, Mr Hood added: “We want to make sure that every pupil regardless of their background has the best possible education experience at home.”

The most popular subjects so far have been English and maths and the most watched lesson has been ‘Counting up to 10’ for Reception pupils.

Mr Hood continued: “One of the things that is really helpful whilst you are social distancing and staying in your home is trying to create a really good quality structure of the day, where that is possible.

“I think during the Easter holiday period structures get more relaxed and now that we are back at term time I think what we are seeing is people wanting to get back to the structure of the day that is right for them.

The academy will now look to expand the range of subjects on offer – such as music, drama, and design and technology.

The BBC’s new virtual learning programme was also launched on Monday with a host of famous faces leading lessons to help educate the nation’s children.

Among those taking part are Manchester City star Sergio Aguero, who will help youngsters learn to count in Spanish, and Professor Brian Cox who is due to teach science topics.

But Tory MP Robert Halfon, chairman of the Education Select Committee, believes that online lessons – including the BBC programme and Oak National Academy scheme – should be broadcast on television so more pupils from disadvantaged homes can access the resources.

He told PA: “Given the lack of access to online learning, children may not have computers or enough data on their phones but they do have televisions.

“BBC could broadcast [online learning resources] for two or three hours a day so that most children would then have access to that learning via the red button on the remote control.”