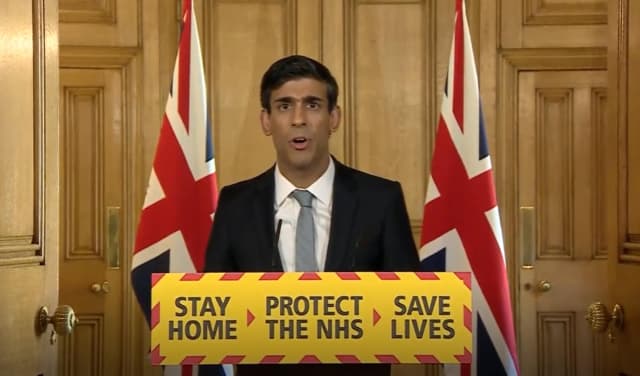 The Chancellor of the Exchequer has dismissed calls for the Government to ramp up the level of support it is providing for small businesses.

Rishi Sunak said that increasing the Government guarantee on loans to help small businesses withstand the economic impact of coronavirus was not the right measure.

Labour had called for the Government to guarantee 100% of the loans taken under the Coronavirus Business Interruption Loan Scheme (CBILS), up from 80% under current arrangements.

“I’m not persuaded that moving to a 100% guarantee is the right thing to do,” Mr Sunak said during the Government’s daily coronavirus briefing on Monday afternoon.

“If you take a step back and look at the sum total we’ve done to support business… some people have made some comparisons with what’s going on in other countries, I think when you look at the totality of what we’re doing it’s more significant in scope and scale than most of those other countries.”

The scheme’s critics say it does not go far enough, and point out that only a small part of the £330 billion Mr Sunak has set aside to guarantee loans has been tapped into so far.

Labour last week called on the Government to guarantee the entire amount that small businesses are able to borrow from banks.

Shadow chancellor Anneliese Dodds wrote to Mr Sunak: “We face a looming insolvency crisis if uptake is not improved dramatically. The Government must be prepared to go further and urgently consider direct changes to the scheme, such as guaranteeing 100% of loans to small firms”.

The Chancellor is expected to hold one-on-one talks with the bosses of major banks this week, to hear how they are responding to the crisis.

Ms Dodds said: “It is encouraging to know the Government is in dialogue with lenders to make the CBILS and new CLBILS (Coronavirus Large Business Interruption Loan Scheme) work more effectively. However, the UK still lags far behind other European countries in getting loans to struggling firms.”

On Monday, the Conservative chairman of the Treasury Committee wrote to the British Business Bank and UK Finance to request daily updates on the loan schemes.

Mel Stride said: “Many businesses up and down the country are facing a daily struggle for survival. They need these emergency loans urgently, but data published so far shows that it has been taking too long to reach them.”

The MP said he wants to be able to publish daily how many applications have been accepted and rejected, and how much has been lent to businesses, among other things.

Several smaller companies have struggled to get through to their banks, complaining of long phone queues.

Birmingham-based restaurant owner George Kafetzis said he continued to pay his staff even after he was forced to close his sites. His loan application has been turned down by Barclays, and he has had no response from Lloyds.

In an email sent to Barclays boss Jes Staley and other top bosses at the bank on Friday, Mr Kafetzis said: “Today is the last day I can pay my staff. I worry about about them; some suffer (from) anxiety and mental health issues.”

“They (the banks) just can’t process the applications quick enough,” he told the PA news agency.

Last week, Bank of England Governor Andrew Bailey called on the banks to speed up lending to small businesses under the CBIL scheme.

“They’re under no illusions that they’ve got to get on with this,” Mr Bailey said.

However, Rob Tickell, the owner of accountancy firm LCA Services which was granted a £50,000 package from Lloyds, said he found the process simple.

“I found the whole process straightforward and quick – my application was approved within just three days of being submitted, and the team really understood my business needs,” he said.