Captain Tom ‘in fairyland’ and on track for number one single 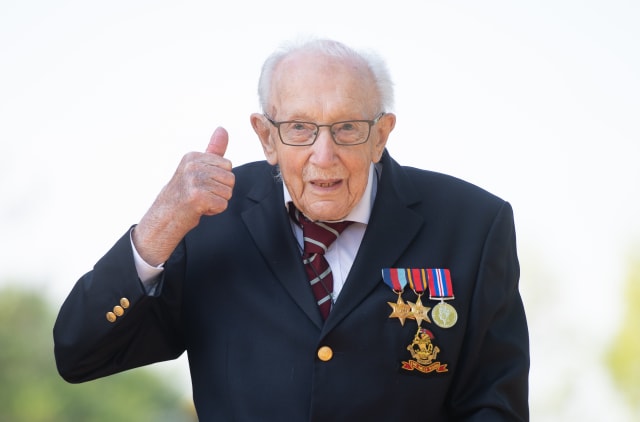 Captain Tom Moore has described the response to his coronavirus fundraiser as “rather like being in fairyland” as he is on course for the number one spot in the charts.

The 99-year-old war veteran has already raised more than £26.5 million for NHS Charities Together and his recording of You’ll Never Walk Alone with West End star Michael Ball is on track to beat Dame Vera Lynn to the top single spot.

However, Captain Tom told Good Morning Britain he was “rather sorry because she’s such a superstar and has been on the top for so long”.

He told the ITV programme he saw Dame Vera sing while he was serving, adding: “When I was in Burma, she came down to Burma and I saw her whilst we were out there.”

The veteran said the performance “gave us so much additional heart”.

The captain has also received a letter from the wartime songstress, and while he would not be drawn on what it said, he said it was “so kind and thoughtful to send such a lovely note”.

The pensioner’s recording, which also features the NHS Voices of Care Choir, sold 36,000 copies in 48 hours and could bring him a debut official UK number one just in time for his 100th birthday on April 30.

His daughter agreed that “our life has changed in the last five days” and said “every day something extraordinary happens”.

Hannah Ingram-Moore added: “We simply remain a happy family and utterly humbled by the support of the public.”

She also sought to reassure people that her father was still getting lots of down time.

Ms Ingram-Moore told Piers Morgan and Susanna Reid they were “getting used to our media schedule” but they “are absolutely making sure we are giving him plenty of time to have a rest”.

She said: “He’s still walking, he’s still going out every day, but he’s having to fit it in with the interviews around the world.”