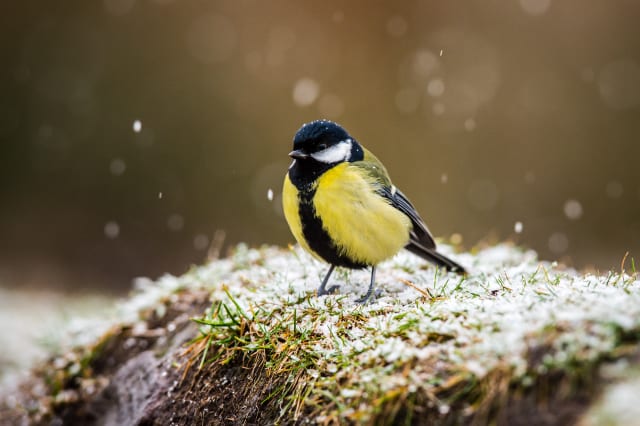 Birds in the wild appear to lower the temperature of their bill to prevent heat loss in order to preserve energy when food is scarce, new research suggests.

Researchers at the University of Glasgow used thermal imaging technology to measure the body surface temperature of the small songbird, the great tit, when faced with a temporary food shortage.

The measurements showed that shortly after nutrition became unavailable, the birds allowed their bill to cool and their temperature remained below the temperature of when nutrition was left available until it was returned.

However, roughly an hour into the food restriction the bill temperature began to gradually rise, suggesting both a level of control over how much the bill is allowed to cool and that cooling may have unwanted consequences, such as reducing the bill’s functionality.

Researchers said that while the technique of birds cooling their bills has previously been observed when food was restricted for long periods and in captivity, this is the first time it has been explored in birds in the wild and where the initial response to a food restriction was investigated.

By continuously filming a wild population of great tits, the researchers were able to see that bill temperature was immediately reduced in response to food restriction.

Lead author Lucy Winder, who undertook the study at the university’s Scottish Centre for Ecology and the Natural Environment (Scene) and is now at the University of Sheffield, said: “Not knowing where your next meal is coming from can be a real challenge for wild animals that must gain sufficient energy to survive each day.

“What these findings tell us is that birds reduce heat loss from their bill by selectively restricting blood flow well before they enter a state of starvation.

“So when a reliable food supply is cut off, birds are predicting they will face energetic shortfalls in future and are pre-emptively acting to prevent this from occurring.

“Our study demonstrates the ability of animals to adapt to changes in food availability, which may allow them to survive in an unpredictable changing environment.”

Scientists said the research on a wild population of birds at Scene, based on the shore of Loch Lomond, was confirmed by measurements of great tits in outdoor aviaries at Lund University, Sweden.

The study also found that eye-region temperature in the wild birds remained at similar levels throughout the food restriction, compared with unrestricted birds, suggesting birds selectively cool the bill rather than lowering the temperature of all surface tissue.

Dr Dominic McCafferty, senior lecturer at the university’s Institute of Biodiversity, Animal Health and Comparative Medicine, said: “Our findings provide evidence that birds selectively allow the bill to cool when a predictable food supply is suddenly disrupted, likely as a means of minimising depletion of body reserves for a perceived future shortage in energy.

“This was an interesting finding as it demonstrates how small animals must respond to winter conditions, when habitats are challenging and food is limited.”

The study is published in the Journal of Experimental Biology.

The research was funded by the Birgit and Hellmuth Hertz Foundation, an Erasmus Training Mobility Grant, the Swedish Research Council, Helge Axson Johnson Foundation, and the Royal Physiographic Society of Lund.