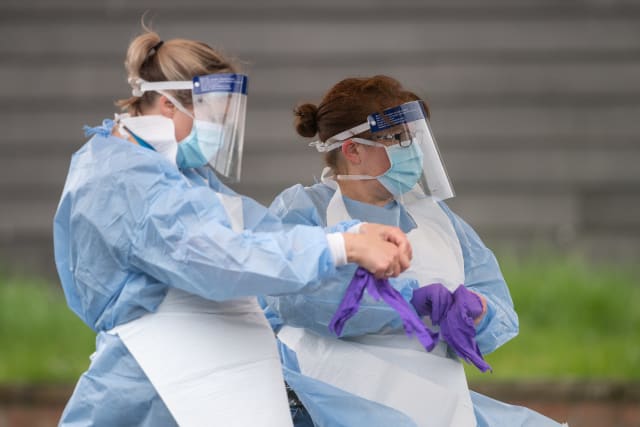 The Royal College of Anaesthetists (RCA) has become the latest medics’ union to criticise the lack of adequate personal protective equipment (PPE), with its head saying doctors should not treat patients without proper equipment.

Professor Ravi Mahajan said in a statement none of the RCA’s members should risk their safety to provide care for pandemic victims.

He said if an anaesthetist tries “their best to acquire and use effective PPE but, having made all the efforts they reasonably can, are forced to conclude that the risk to their own health is unacceptable and that they cannot treat a patient, the Royal College of Anaesthetists will offer them its support”.

He added: “This is one of the worst situations in which a caring doctor or any other healthcare worker can be placed and we sincerely hope it does not arise.”

He also told The Independent that RCA members had been advised to “take stock of everything”.

“Your health, the patients, the compromises that you may have to make, are they safe enough?” he asked.

“Take the whole picture into account. And then if your decision is, I can’t provide this treatment at this time, then we would support you.”

It comes after the hospital doctors’ union said officials responsible for the UK’s “disgraceful” lack of adequate PPE needed to be held “fully accountable for their abject failure” to protect frontline health staff.

Hospitals and employers will now be able to use new official guidance on reusing items or wearing different kit to “coerce health workers … to risk their own lives when caring for Covid-19 patients”, said HCSA president Claudia Paoloni.

Amid fears hospitals could run out of supplies, Dr Paoloni said it was an indictment of the UK’s response to the pandemic that it was drawing on the emergency measures, which involve “an extremely high risk of cross-contamination for both staff and patients”.

The criticism comes as the Government appointed London 2012 Olympics chief executive Paul Deighton to “unleash the potential of UK industry to scale up domestic PPE manufacturing”.

More than 15,000 patients have now died in hospital after testing positive for the disease in the UK, with thousands more deaths expected in care homes.

“Lord Deighton led the delivery of the Olympics. Now he will lead a singular and relentless focus on PPE as the country’s top manufacturing priority, with the full weight of the Government behind him.”

The Government has been under fire for weeks over the distribution of PPE, with some frontline staff warning that they have had to work in situations where they feel unsafe.

Some 84 tonnes of PPE had been due to arrive in the UK from Turkey on Sunday, including 400,000 gowns, the supplies of which have been described as “critical” by NHS Providers, which represents hospital trusts.

But the shipment was delayed, with the first of three RAF flights finally leaving on Monday for Turkey to begin collecting consignments.

Parliament returns on Tuesday amid mounting criticism of the Government, but ministers have insisted they are pursuing “every possible option” to secure additional kit in a “very challenging” global situation.