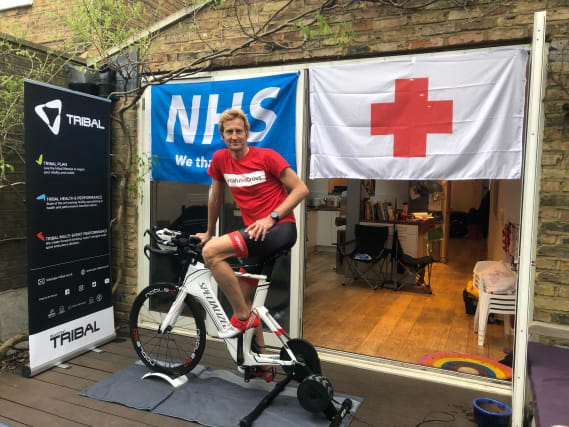 An amateur athlete has raised nearly £9,000 for charity by completing a half-Ironman triathlon in his back garden.

To complete it without leaving his back garden on Sunday, Mr Clark cycled on a static bike, swam in a three-metre pool while tethered to his house via an elastic waistband and ran 1,700 laps of his lawn.

“Everybody wants to contribute to do something,” he told the PA news agency. “We’ve seen all these key workers going out putting themselves at risk.”

Mr Clark, who has been taking part in triathlons for 11 years, had planned to compete in a number of events this year, the first of which would have been in Marbella next week.

When this was cancelled he decided to put the training to use raising funds for NHS Charities Together and the British Red Cross instead.

He said: “When we train we aim to peak at a certain time, so I am kind of peaking now, and it’s like what do I do? I’ve got all this fitness.”

Mr Clark completed the triathlon in seven hours, 22 minutes and 25 seconds – around two hours more than his personal best.

Among the challenges that presented themselves were the unusual nature of the run – not only the tight laps, which required him to change direction every so often so he did not get dizzy, but also the obstacles presented by the garden set-up.

Mr Clark explained: “The swimming pool had supports that slightly stick out, and I’ve got an overhanging peach tree that I was going to put some foam around but I didn’t get round to doing it so I had to be careful I didn’t knock myself out.”

During his feat, Mr Clark received messages of support from friends and family, read out by his wife and two children, aged seven and five.

He also received shouts of encouragement from his neighbours, who then ventured out on to the street to celebrate his achievement once his gruelling run was complete.

“I jumped in the swimming pool, went out through the house, and they all came out and were clapping and cheering,” he said.

“We had the whole road out, and it was very emotional.”

Mr Clark chose the two charities as he has friends who work for the Red Cross, while two of his neighbours are NHS doctors.

He said: “What I did today was easy really, I’m not risking my life by jumping in a pool of water or running around in a circle.

“But these guys, I know every time they go in they’re putting themselves at risk.”

By Monday afternoon he had raised £8,700. You can donate by going to www.virginmoneygiving.com/NeilClarkGardenIM703.