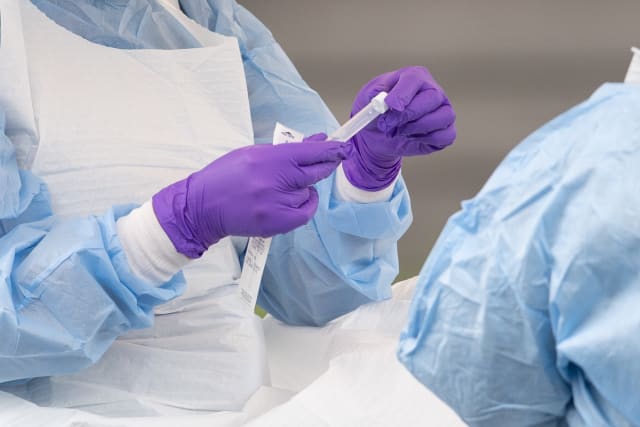 The Welsh Government has set out plans to “remove the bureaucracy” from the coronavirus testing system in the country.

Health Minister Vaughan Gething said the plans would result in more critical workers being tested so they can return to work more quickly.

Plans include the military looking at operational processes to make the system quicker and more efficient, and an online booking system.

“We are increasing our capacity for testing in Wales through our community testing units, the introduction of regional drive-in testing centres and, within weeks, an online home testing service,” Mr Gething said.

“As the daily number of tests have not been matching the capacity we’ve built up in Wales, I ordered a rapid review of the current system.

“The review has produced a number of recommendations to speed up the process of referring key workers for testing. I have accepted all of these to be implemented immediately.

“Today I have also published our critical worker testing policy outlining which workers will be tested and how.

“I want to see a rapid increase in testing of critical workers across Wales so they can return to work more quickly and have the confidence to carry out their work safely.

“Their contribution to stop the spread of coronavirus and keeping us all safe is invaluable.”

The Welsh Government had set a target of 5,000 tests per day by the second or third week of April but this has not been reached.

Daily capacity is currently at 1,300 per day, with documents setting out the new plan admitting the 5,000 figure would not be achieved by the third week of April.

It said it had “experienced a range of delays in securing some of the equipment and reagents for processing and running swab tests”.

Data published by Public Health Wales shows the number of daily tests are often well below the 1,300 capacity, with 783 carried out on Friday.

Adam Price, the leader of Plaid Cymru, said the Welsh Government would have to increase the number of daily tests by 45% every day this week to reach the target of 5,000 tests per day.

“Every day where the testing target is missed is another day lost in the fight against this pandemic,” Mr Price said.

“We need to see a dramatic increase in daily testing as a matter of absolute urgency. Failing for a third time is simply not an option.”

Angela Burns, shadow health minister for the Welsh Conservatives, welcomed the charges to testing processes but said there was “more to do”.

“Once these issues have been addressed and testing capacity eventually ramps up, it’s then important for testing to broaden and include population testing,” she said.

“No one yet knows how long Covid-19 will be with us, and it is vital the Welsh Government raises its game.”

Figures released on Saturday showed that a total of 534 people have died with confirmed coronavirus in Wales, an increase of 28 deaths since Friday’s figures.

Public Health Wales said the figures related to people who had a laboratory-confirmed case of Covid-19, with the majority of deaths occurring in hospital settings and some in care homes.

By health board area, the deaths were located as follows: 195 in Aneurin Bevan, 113 in Cardiff and Vale, 129 in Cwm Taf Morgannwg and 84 in Swansea Bay.

The 13 other deaths were in three health board areas – Betsi Cadwaladr, Hywel Dda and Powys – that have seen a “very small” number of fatalities.

Figures for these health boards are not being shown to protect the identities of those who died there.