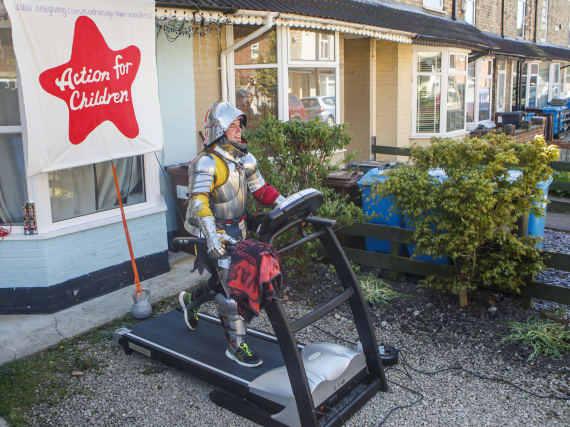 A man has completed 10km on a treadmill in his front garden while dressed in a five-stone suit of armour to raise money for underprivileged children and their families.

Mike Manders decided to complete the charity race from his home after the official Hull 10K race was postponed.

The 34-year-old has lost five stone since taking up running last year, the same weight as the armour he wore on Sunday, and is hoping to raise £1,000 for children’s charity Action For Children from the challenge.

Neighbours in Acland Street, in Hull, gathered in their front gardens on Sunday as the father-of-six completed the race in one hour and 38 minutes.

They cheered and applauded as Mr Manders increased the speed on his treadmill for the last 100 metres and crossed the virtual finish line to a shower of confetti provided by his children.

Mr Manders, an on-board manager for Hull Trains, said he was due to run the Hull 10K on Sunday but it was postponed until August due to the coronavirus outbreak so he decided to complete the race in his garden.

he medieval re-enactor told the PA news agency that he decided to complete the 10km in the suit of armour after a friend told him to “go big or go home”.

He said: “I thought, well knights protect the innocents and what better way than to wear a suit of armour, be a knight and look after Action For Children.”

He continued: “I read through the story behind Action For Children and what they do and it really touched close to home so I thought, why not do something that can help underprivileged children and their families, especially at this time at the moment where they’re struggling, it helps them get through day by day.”

Mr Manders said he weighed 18st 10lbs when he decided to take up running last year and could not even run 1km without having to stop.

He said: “I thought I wanted to be there for my children in the future so I needed to get in shape so I started running and, up to now, I’ve lost five stone and the armour is pretty much the same weight as what I’ve lost, the armour weighs 5st 3lbs, so it’s a good inspiration.

“It also shows my children that if you put your mind to anything, you can do it.”

Mr Manders said he felt “great” after the challenge, despite the armour rubbing on his foot, backache and feeling “sweaty”, and said he would celebrate with “a nice pot of stew and a beer”.

He said he had raised just over £500 on Sunday afternoon, which he described as “amazing”.

He said: “It’s just overwhelming the generosity of people and the support they give, the kind words and the donations are just amazing, it makes you feel really good.”

Mr Manders said he is looking forward to completing the rearranged Hull 10K and the Great North Run in armour later in the year.