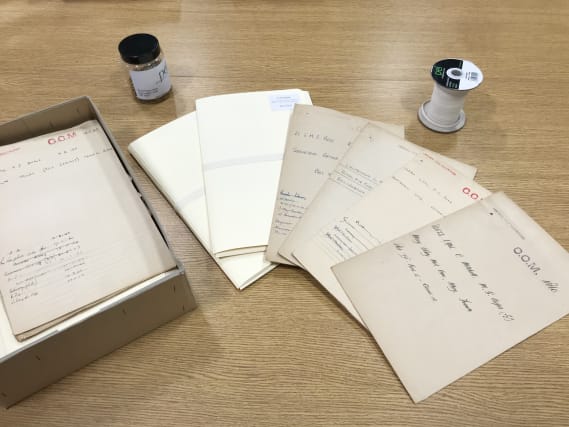 A mourning father’s near 20-year search for his son’s grave after the First World War is among the moving stories revealed in archives being made public for the first time.

The Commonwealth War Graves Commission (CWGC) will provide online access to more than 1,000 “enquiry files” that record its correspondence with families looking for the location of fallen soldiers following the end of the conflict.

Their appeals for information on lost loved ones are told through the previously unpublished set of letters, typed memos, photos, maps and diagrams available on the CWGC’s website from Monday.

Lt Malcolm, serving as an observer in the Royal Flying Corps, was reported missing in May 1918, after his plane was shot down in the Ypres-Menin district while on reconnaissance duty.

His death was not confirmed until December, and the following year his father George Malcolm, from Cheshire, began writing to the newly formed Imperial War Graves Commission (IWGC), as the CWGC was initially known, for help pinpointing where his son fell.

But searches of the battlefield produced no clues and in desperation Mr Malcolm took out an advertisement in the German press appealing for help.

He received more than 70 replies from former German soldiers, some providing maps of the crash site and some claiming to have buried his son.

Sharing the information with the IWGC, he wrote: “I am bound to say to the honour of the numerous Germans who have replied, I have had a number of answers, and many in a kindly strain.”

But the search ultimately proved in vain, and in 1932 Mr Malcolm received tickets to the unveiling of the Arras Flying Services Memorial in France, where his son and his pilot, Captain Ralph Bell, are remembered.

In the years following the 1918 Armistice, the IWGC took on the huge task of constructing memorials and cemeteries for the 1.1 million Empire war dead, more than half of whom were missing.

It exchanged tens of thousands of letters with wives and parents wanting to know where their husbands and sons were buried.

Among them was the family of Major Cedric Dickens, grandson of Victorian writer Charles Dickens, who was killed by German machine gun fire aged 27, in September 1916.

His mother Lady Marie Dickens the famous novelist’s daughter-in-law, was so determined to protect her son’s grave that she bought the land where he was buried near the village of Ginchy in northern France.

She made annual visits to the private memorial and arranged for the IWGC to maintain it on her behalf.

Her affection for the area grew and led her to donate money for the construction of a water mill to help Ginchy’s residents.

After her death and the end of the Second World War, the Dickens family decided the fallen major should be exhumed and moved to a more recognised war cemetery.

But in a surprising development, extensive searches of the area failed to uncover his remains.

Ultimately, Major Dickens’s brothers and sisters gifted his oak cross memorial and the land to the local community who turned it into a memorial garden.

Andrew Fetherston, chief archivist for the CWGC, said releasing the e-files would help deepen public understanding of the impact of the First World War on families.

“For everyone who died in the First World War there was inevitably a partner, parent or child back home who had questions,” he said.

“The heart-breaking letters in CWGC’s archive give us an insight into what it was like for those families trying to come to terms with their loss.

“They are stories that show desperate searches for closure, former enemies uniting and, on many occasions, the sad realisation that a missing loved one would always remain so.”

The records are part of a collection of nearly 3,000 files, half of which have been digitised so far.

They accompany a previously unreleased collection of more than 16,000 photographs held in negatives in the CWGC’s archive.

The CWGC commemorates the 1.7 million Commonwealth servicemen and women who died during the two World Wars at thousands of memorials and cemeteries around the world.