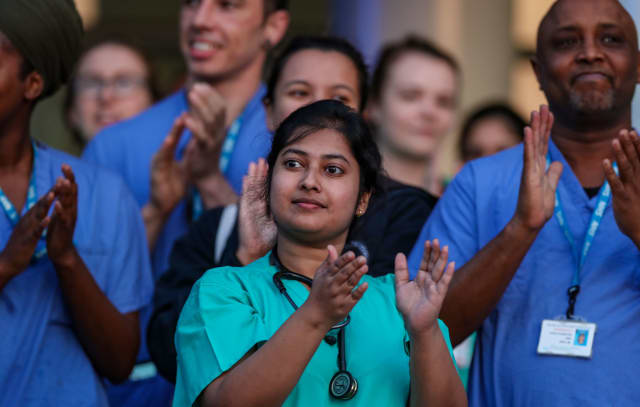 A campaign thanking NHS staff for their work during the coronavirus crisis has raised £1 million.

More than 200,000 people have supported the #OneMillionClaps campaign in a week by donating £5 to send a personal message of support to NHS workers.

ITV, official broadcast partner for the campaign, dedicated a day of broadcasting messages to NHS staff on the front line.

The #OneMillionClaps campaign is part of an appeal launched two weeks ago by NHS Charities Together – the official umbrella organisation for NHS charities.

Donations will be used to provide a range of supplies and support for NHS staff, volunteers and patients – including food, travel, accommodation, electronic communication devices to keep in touch with family and friends, and mental health support and counselling.

If the campaign generates a million claps, the appeal will raise at least £5 million – and significantly more if supporters make a Gift Aid declaration that enables the charity to reclaim tax on their gift.

A short film featuring NHS staff and people from across the UK has been produced to promote the appeal.

The film – voiced by David Walliams – features a re-recording of the Queen classic We Will Rock You with a new lyric: “NHS, We Love You. We Say, We Say, Thank You.”

Queen guitarist Brian May said: “My first call was to Roger (Taylor, Queen drummer), who was immediately enthusiastic, and the whole Queen team warmed to the concept, especially because, as they put it, ‘When it comes to Britain clapping together and doing something amazing, there’s only one soundtrack!’

“I’m particularly happy that my song should be used to help this campaign raise funds to support all the hardworking and committed NHS staff, and we, as Queen, are honoured to be a part of it.”

Ellie Orton, chief executive of NHS Charities Together, said: “The public support for #OneMillionClaps has been extraordinary and humbling.

“To have over 200,000 people join the text-to-donate campaign and give over £1 million in just a week is remarkable.

“We are currently distributing these messages of thanks to our hospitals. These messages have touched every one of us.

“Like everyone I’ve been incredibly moved by the millions of us showing our public support for our health service.

“I really hope #OneMillionClaps inspires those who can to give a donation that will make a real difference to the amazing staff and volunteers who are daily saving lives and battling against this horrible virus on our behalf.

“Every single penny raised for nurses, doctors and NHS staff in this way will go to help those health service workers who are working so hard and risking so much to help us.

“Thousands of staff are risking their lives every day for us and many of them are now sick themselves or at breaking point. If we can raise £5 million through #OneMillionClaps, it will go a long way to providing them and their families with the support they so desperately need.”