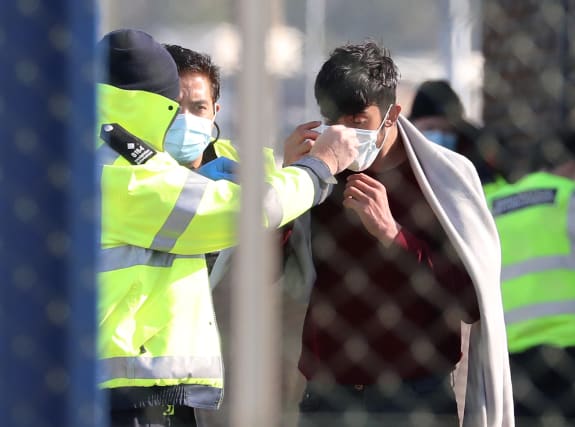 Home Secretary Priti Patel has insisted she is “determined” to stop illegal Channel crossings amid a continued flow of migrants being brought to Kent.

Another 73 migrants were intercepted trying to reach Britain on Friday amid the global coronavirus pandemic.

Border Force officers were seen processing suspected migrants at the Port of Dover, who were pictured wearing face masks.

Charities have called on the UK Government to rethink its approach, with one calling on Ms Patel to “stop chasing unicorns” and instead “create safe and legal routes for those seeking sanctuary”.

Charity workers in France fear a humanitarian crisis in migrant camps near Calais and Dunkirk after the first cases of Covid-19 were found there in recent weeks.

At least 470 migrants have been intercepted by UK and French authorities since Britain went into lockdown on March 23.

The Home Secretary condemned the people smugglers who enable the crossings, saying: “I will not stand by whilst malicious criminals prey on the vulnerable.

“Criminal gangs are using false promises to take advantage of desperate situations and illegally smuggle people into the UK.

“And I am determined to stop this criminal trade.

“We will enforce the law and we will seek justice.

“Protecting our border is one of my top priorities.”

Ms Patel said she continues to work with her French counterpart, and added: “We are continuing to support the French to deploy extra patrols on French beaches, drones, specialist vehicles and detection equipment to stop these boats leaving European shores.

“And I will always make sure that Border Force have the resources needed to tackle these dangerous crossings and keep our border secure.

“My message to the criminals is: Your heinous crimes will not be tolerated and I will work tirelessly to bring you to justice.”

“The only way to eliminate boat crossings and put people smugglers out of business is to create safe and legal routes for those seeking sanctuary.

“This would also allow us to stop pouring millions more of UK taxpayer pounds into failing French border security measures.”

Stephen Hale, chief executive at Refugee Action, said: “It is shameful that this many people have been left so desperate they have risked their lives to cross the Channel.

“This is the result of a shocking lack of safe and legal routes to seek safety in the UK.

“The Government can and must change this. More routes for people to claim protection in the UK should be provided, including a long-term commitment to resettle 10,000 refugees every year.”