Families to be allowed to attend funerals to mourn loved ones 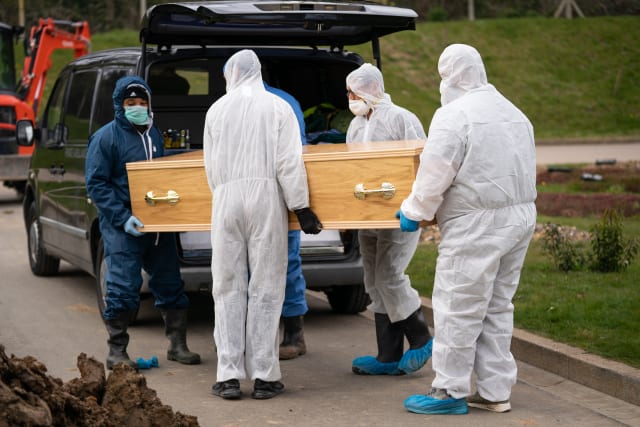 Families have been told they can attend funerals to mourn their loved ones and be allowed to visit their graves.

At the daily press briefing in Downing Street, Local Government Secretary Robert Jenrick asked councils to keep cemeteries and graveyards open, or to reopen them if they are currently closed.

He also urged councils to keep parks open after some closed their gates in recent weeks.

He pointed to the death of 13-year-old Ismail Mohamed Abdulwahab, from Brixton in south London, who died after contracting Covid-19 on March 30.

He said the tragedy was compounded after Ismail’s family were not able attend his funeral four days later because they were self isolating, after two of his six siblings had displayed mild symptoms.

“That is not right and it shouldn’t have happened,” Mr Jenrick added.

“For clarity, funerals can go ahead with close family present.

“Social distancing measures must be respected, but families must have the opportunity to say a respectful goodbye to those that they love.”

He also said he had “made it clear” to councils that all parks must remain open after some closed their gates in recent weeks.

Victoria Park in east London reopened on April 11 after being shut for two weeks, while Brockwell Park in south-east London had closed on April 5 after Lambeth Council claimed 3,000 people, many sunbathing or in large groups, had visited the day before.

Mr Jenrick warned people must abide by social-distancing rules and not congregate in the green spaces.

He said lockdown measures were harder for those without gardens or open spaces and that “people need parks”, adding they needed to be accessible for “the health of the nation”.