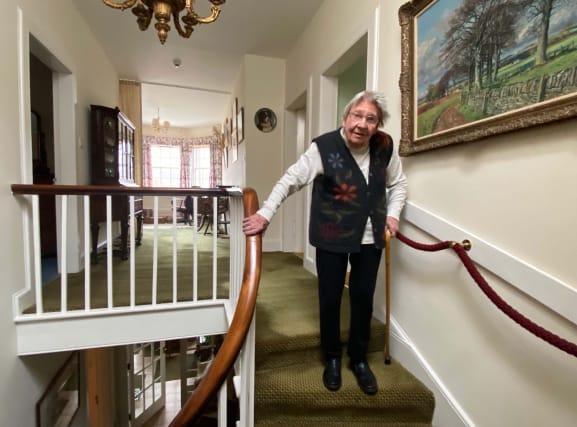 A 90-year-old woman who is climbing the equivalent of a Highland mountain on her staircase has raised £100,000 for the NHS and a hospice.

She said 99-year-old veteran Captain Tom Moore, who has raised more than £18.5 million for the NHS through a charity garden walk, inspired her to take on the climb.

Mrs Payne started the challenge on Easter Sunday and expects it will take her around two months to complete.

The challenge is her way of saying thank-you to NHS and hospice staff who took care of her late husband Jim.

She said: “I’m completely overwhelmed and humbled by the generosity of everyone who has donated to this amazing cause.

“I felt so inspired by Captain Tom Moore that I wanted to challenge myself to raise what I can for the NHS and Highland Hospice, as a thank-you from me for the extraordinary care and support they’ve given to my family, especially my husband and myself.

“My husband died at Christmas and the NHS were absolutely wonderful. So it was a way of saying thank-you.”

Mrs Payne, who lives in Ardvar, Sutherland, said she was never a hillwalker, having lived with knee problems since she was 12.

Her true passion was fishing and she said she would walk miles to reach the best spots.

She said: “I do walk around the garden, every nice day.

“I’m always afraid of being blown over now so when it’s windy I daren’t go.

“Our house stands rather high, facing the prevailing winds so it asks for it a bit.”

Mrs Payne takes on the stair-climbing challenge several times throughout the day, starting in the morning once she is ready and finishing in the late afternoon.

Her daughter Nicky McArthur believes the fresh air of north-west Scotland has helped keep her mother healthy, adding: “Mum is still incredibly active. She is an avid reader and crossword-doer. I think part of it is just staying interested in life.”

You can donate to Mrs Payne’s challenge at https://uk.virginmoneygiving.com/fundraiser-display/showROFundraiserPage?userUrl=MargaretPayneArdvar-SuilvenChallenge&pageUrl=1.