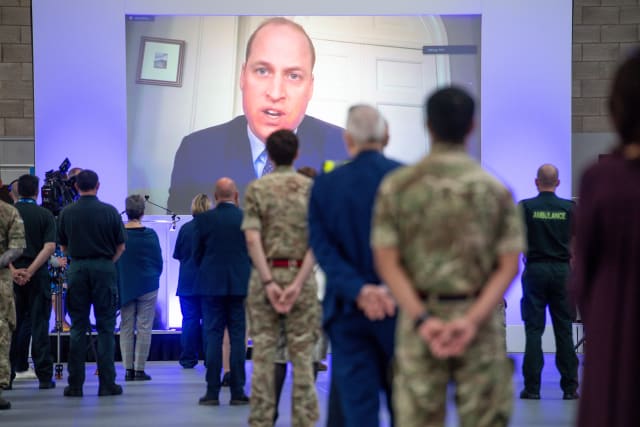 The Duke of Cambridge has suggested labelling NHS staff as “heroes” may inadvertently alienate some health workers who are “scared going to work every single day”.

William said the praise was “totally valid” for those who were “putting their lives and health on the line for all of us” but society should be “careful”.

His comments came in an interview with his wife for BBC News, and the future king said he hoped a positive outcome from the Covid-19 outbreak would be a lessening of materialism and that it “re-centres, re-focuses and brings us all together as a world”.

The duke and duchess have been talking to those on the frontline over the past few weeks in video calls, and William told the broadcaster: “A lot of them are putting their lives and health on the line for all of us and I think that is coming across.

“I think the nation is appreciating and understanding the sacrifices that many of these people are making.

“But I’ve also been hearing that there are those who are working in the NHS, who, understandably, are nervous, are anxious.

“And this hero tag that we’re attaching to the NHS workers, albeit is totally valid.

“We’ve got to be careful that we don’t, you know, alienate some of the other NHS workers who do really generally worry and are scared going to work every single day.”

The nation has been showing its appreciation for all care workers in the weekly public displays of gratitude in the form of applause, banging of pots and even fireworks being let off, every Thursday at 8pm.

But there has been a toll, with Health Secretary Matt Hancock saying the Government has identified more than 25 NHS staff who have died after contracting coronavirus, but the true total is thought to be far greater.

The PA news agency has confirmed the deaths of at least 40 frontline NHS workers during the pandemic.

William went on to say: “This is so new.

“We’ve never seen anything like this since the Spanish flu.

“I think (this) has caught all of us off guard, but I do really hope that people start valuing things that really matter in life and forget about some of the materialism that’s been out there in the past.

“And this re-centres, re-focuses and brings us all together as a world.

“We need to be brought together a lot more.

“There’s a lot of divisiveness out there and I really hope you know at the end of all this that we are a bigger global community than we’ve ever been before.”