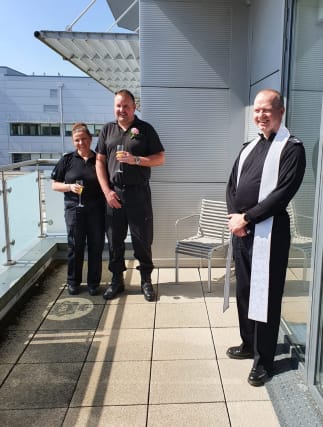 As Captain Tom Moore’s fundraiser climbs closer to £19 million, another nonagenarian has raised £100,000 for the NHS and her local hospice, and two police officers celebrated their wedding day on duty.

Here’s a look at Friday’s more uplifting stories which you might have missed.

A 90-year-old woman with knee problems is climbing the equivalent of a Highland mountain on her staircase and has raised more than £100,000 for the NHS and her local hospice.

Margaret Payne plans to climb the height of Suilven – 2,398ft – by making 282 trips upstairs over the next two months.

She said 99-year-old veteran Captain Tom Moore, who has raised more than £18 million for the NHS through a charity garden walk, inspired her to take on the climb.

Mrs Payne started the challenge on Easter Sunday and said this was her way of saying thank you to NHS and hospice staff who cared for her late husband Jim.

Two police officers have marked what should have been their wedding day with a ceremony while on shift.

Sergeant Marie McNulty and Pc Jay McGreavy, from Greater Manchester Police, should have tied the knot on Thursday but instead spent the day working to help keep communities safe.

However, colleagues in the Bury police team did not let the day pass without some celebrations.

Sgt McNulty arrived at the office to the song Here Comes The Bride and the couple, who wore corsages throughout the day, found flowers and champagne waiting for them.

Woolwich Ferry was spotted sounding its horn and spinning in the River Thames in support of healthcare staff.

The show of thanks took place during the fourth weekly Clap For Carers event on Thursday evening, which saw members of the public applaud from their doorsteps and balconies for NHS staff.

Junior doctor Becky Stout, who filmed the tribute, said on Twitter: “Big thumbs up from the Woolwich Ferry for NHS workers tonight!”

More than two-fifths (42%) of those polled said how much they value food and other essentials has changed since the pandemic and almost as many (38%) said they are cooking from scratch more.

Other changes people have seen include 61% spending less money and 51% noticing cleaner air outdoors, while 27% think there is more wildlife.

There has been a boost to social bonds too, with two fifths saying there is a stronger sense of community in their area since the outbreak began and 39% saying they are catching up with friends and family more.

– McFly re-records number one song in aid of NHS

Members of pop band McFly have re-recorded their number one single All About You from their separate homes in aid of the NHS.

The single, originally released in aid of Comic Relief in 2005, was re-recorded onto YouTube and shows each of the band members and their families and pets singing at home.

Sharing the video to Twitter, McFly said: “We’ve recorded a YouTube video to say thanks to the NHS and to keep you entertained at home whilst raising money… please watch, re-watch, share and donate.”