The NHS workers who have died during the coronavirus pandemic 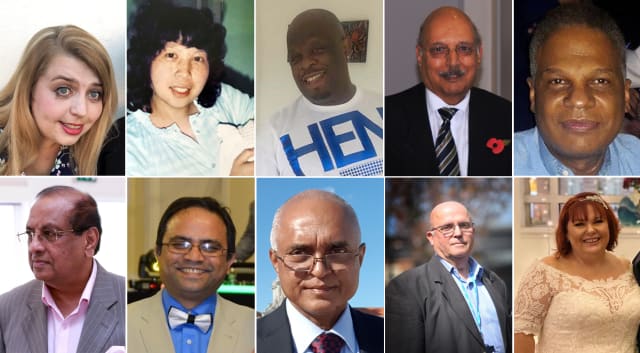 From porters to doctors, dozens of NHS staff have died while fighting the coronavirus.

Health Secretary Matt Hancock said the Government had now identified 27 NHS workers who had died after contracting coronavirus, however the true total is thought to be significantly greater.

These are the names of health service workers known by the PA news agency to have died during the pandemic.

Aged 73, Ms Murphy worked at the Edinburgh Royal Infirmary for almost 30 years, first as a cleaner before being retrained as a clinical support worker.

“Jane would help anybody out, but would tell you if you were wrong,” a friend said.

The 46-year-old, who worked to support people in Derby, has been described as “precious” by Science minister Amanda Solloway, and “much-loved,” “warm” and “caring” by her colleagues.

Ms Mujajati, who had an underlying health condition and had stepped away from work in recent weeks, died in hospital, the Derbyshire Healthcare NHS Foundation Trust said.

Known as “Des” to her colleagues, the healthcare assistant was remembered as “diligent and compassionate” by the Bolton NHS Foundation Trust.

In a statement on April 16, chief executive of the trust Fiona Noden said Ms Campbell died in the critical care unit at Royal Bolton Hospital after contracting the virus.

Mr Bamotra, known to colleagues as “Bob”, was said to have “treated everyone like his own family”, and leaves behind a wife, daughter and son.

The 63-year-old had worked at the King George Hospital in Ilford, east London, for four years, and is suspected to have died from coronavirus. His death was announced on April 15.

The 57-year-old, a theatre assistant at the Wrexham Maelor Hospital in North Wales, died on April 15 after testing positive for the disease.

His sister, Maria Molloy, described her brother – who had worked at the hospital for almost 40 years, as a “kind man” who dedicated his life to his profession and “always had a smile on his face”.

The 51-year-old senior head nurse at the Brynteg dental practice in Sketty died on April 14 having been admitted with Covid-19 in March, according to NHS Wales.

Brynteg practice owner Nik Patel said: “She brought love, light and joy to everyone around her and will be sadly missed by all.”

Aged 55, the mother-of-five was an agency nurse who lived in Leeds and worked at Harrogate Hospital. She died on April 13.

Her daughter said: “It meant everything to be a nurse, she’s been doing it for as long as I remember – more than 30 years.”

The father-of-two worked as an associate specialist in neurorehabilitation at the Royal Berkshire Hospital in Reading for more than 21 years.

The 62-year-old, who died in the intensive care unit at the hospital on April 12, was called a “superhero dad” by his two sons in a tribute.

“To us, he was simply the best human we know and we will miss him every day,” they said.

Mary Agyeiwaa Agyapong died on April 12 after testing positive for Covid-19 earlier in the month.

David Carter, CEO at Bedfordshire Hospitals NHS Foundation Trust, said: “Mary worked here for five years and was a highly valued and loved member of our team, a fantastic nurse and a great example of what we stand for in this Trust.”

Ms Williams, who worked as a housekeeper on an elderly patient ward at the hospital in Edmonton, north London, died on April 12.

Grandmother Mrs Ellington, who was in her early 60s, worked at Southmead Hospital in Bristol and passed away on April 12.

She had worked for the NHS for over 25 years at both Frenchay and Southmead hospitals.

Her family said: “She would light up any room she entered. She will always be in our hearts.”

Mrs Medel, who worked as an agency nurse in south Wales, was described as a “wonderful and caring person”. Her employers, Cardiff-based Hoop Recruitment, said: “The nursing profession has lost a warm-natured and beautiful nurse who cared for so many vulnerable people during her nursing career.”

Amarante Dias, who worked at the Weston General Hospital in north Somerset, was described as a “valued and much-loved colleague” and would be “greatly missed”.

The “dedicated and very caring” Filipino nurse, 60, died at St Mary’s Hospital in Paddington, London, on April 12, just two days after being admitted.

Aged 45, Oscar King Jr, a Filipino porter at the John Radcliffe Hospital in Oxford, passed away on April 11.

He was said to have worked for the hospital for more than a decade, “always doing his job with great enthusiasm and joy”.

The mother-of-four was described as “an example to every one of us” by her daughter.

Mr Darlington, a porter with Mid Cheshire Hospitals, was known for handing out sweets to his colleagues. He died on April 10 aged 68.

His wife of 46 years Ava said: “He was dedicated to the trust, and as a family we are grateful for and appreciative of all of the kind words and messages we have seen and received.”

Aged 39, the nurse and mother died at the Queen Elizabeth The Queen Mother Hospital (QEQMH) in Margate, Kent, where she worked, on April 9.

The 53-year-old wrote a Facebook post asking Prime Minister Boris Johnson to urgently provide every NHS worker with PPE just five days before he died on the night of April 8.

A “highly-regarded” associate specialist in cardio-thoracic surgery at the University Hospital of Wales, Mr Rathod died on the morning of April 6.

Princess Alexandra Hospital in Harlow, Essex, announced the death of the 54-year-old – the first involving a serving NHS midwife after testing positive for the virus – on April 5.

A care co-ordinator in Hillingdon, north-west London, Ms Perugia was aged just 29 at the time of her death, which was confirmed on April 5.

She was described by a colleague as a “lovely woman, who never said no to any requests”. Her mother, sister, brother and fiance all work for the same NHS trust she represented.

Aintree University Hospital said the staff nurse died on April 3, with her family describing the loss as “simply beyond words”.

The Mail On Sunday reported that the 27-year-old nurse, who treated coronavirus patients at Watford General Hospital, died after a shift on April 3.