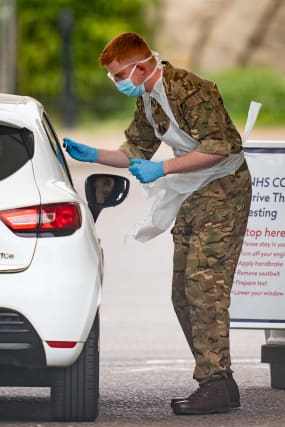 Police and prison staff are among the frontline workers who will now be able to access coronavirus tests, the Government has said.

The news comes on the day the Health Secretary called testing levels “frustrating”.

Any of their symptomatic family members will also be able to find out whether they are positive for Covid-19.

In areas where there is extra capacity, tests may also be offered to delivery drivers, the Department of Health said.

Speaking at a virtual session of the Commons Health Committee on Friday, Matt Hancock said testing figures for the day before were just over 18,000.

This is up from 15,994 tests carried out across England, Scotland and Wales in the 24 hours up to 9am on Wednesday.

The Government has said it wants to reach 100,000 tests a day by the end of April.

At the committee, Mr Hancock said: “We have capacity for 10,000 more tests a day than we did yesterday which I find, given the pressures on testing, is frustrating.”

Asked by former health secretary Jeremy Hunt about the target, he said: “I don’t think if we’d announced the 100,000 target a couple of weeks earlier as you suggest we would be in any different position now because we were continuing the drive to increase testing all along.”

Reacting to the expansion, Mr Hancock said he was “determined” every person who needs a test should get one.

He added: “Testing is key in our battle against coronavirus and we will continue to prioritise patients, NHS and social care workers but we now have the ability to provide more people with the certainty they need to get back to the front line when it is safe to do so.”