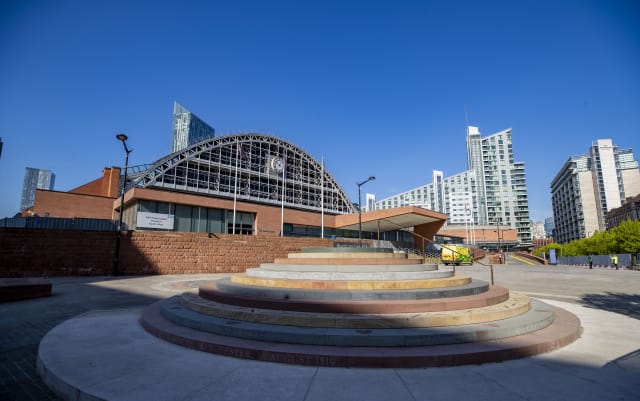 The Duchess of Cornwall has described a new Nightingale hospital as bringing “light to a dark time” at its official opening.

A recorded speech from Camilla was played on Friday during the opening of the NHS Nightingale Hospital North West, built at the Manchester Central Convention Centre to care for coronavirus patients.

The duchess said: “In creating this Nightingale hospital, you have truly brought light to a dark time.

“But this is not surprising. Manchester is a past master at bringing light to dark times.

“After all, this is not the first time you have shown the world what it is to meet a great challenge with even greater resolve.

“My husband and I visited Manchester in 2017, shortly after the terrible bombing, and were deeply moved and inspired by the city’s courage and unity.”

Camilla thanked the NHS, military, social services, planners, builders and technicians who were involved in getting the temporary hospital up and running within weeks, as well as the staff who will work there.

She added: “We all feel the deepest admiration for the single-minded dedication that has created the NHS Nightingale North West Hospital, and the way all efforts have been directed to one object: caring for those who contract Covid-19.

“This gives us the hope and the confidence that the virus will be defeated.”

The facility, which has already started treating patients, will provide oxygen therapy and general medical care for people with Covid-19 who do not need critical care.

Mayor of Greater Manchester Andy Burnham said: “If the rules allowed, I would be at the door to shake the hand of each and every member of staff for the care you are about to give and for the work you are doing.”

The hospital is one of seven being built around the country as part of the NHS effort to respond to the pandemic, with facilities in London and Birmingham already open.

Chief executive of NHS Nightingale Hospital North West Michael McCourt said: “Building this hospital in just a couple of weeks has taken the determination and boundless energy of people from many organisations who have come together to ensure our NHS has the necessary capacity during the pandemic, in what is an unprecedented response to an unprecedented crisis.”

He said there were enough critical care beds in the region to meet expected peak demand and the Nightingale would provide additional capacity for lower-level care.

Initially, 36 beds will be available but the hospital could treat up to 750 patients.

Health Secretary Matt Hancock, who also recorded a speech for the opening, said: “It is exceptional to witness how quickly a brilliant team of NHS clinicians, military planners, construction workers and engineers have joined forces to build and equip a third NHS Nightingale, this time in Manchester, in less than three weeks.”

Leader of Manchester City Council Sir Richard Leese said: “Of course we hope as few of the 750 beds will be needed as possible, but we should take reassurance that the resource is there to help ease the pressure on our hospitals as we tackle the Covid-19 outbreak.”