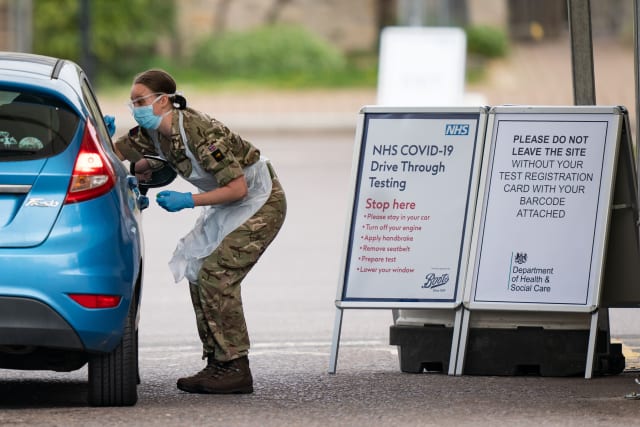 The Health Secretary has described the current level of testing as “frustrating”, as he announced eligibility for tests will soon be expanded to more non-patients.

Speaking at a virtual session of the Commons Health Committee on Friday, Matt Hancock said testing figures for the day before were just over 18,000.

This is up from 15,994 tests carried out across England, Scotland and Wales in the 24 hours up to 9am on Wednesday.

On Thursday, Downing Street said the UK has the capacity to conduct 35,000 coronavirus tests a day.

Mr Hancock told the committee: “We have capacity for 10,000 more tests a day than we did yesterday which I find, given the pressures on testing, is frustrating.”

Total testing capacity includes 20,771 in public facilities and a further 14,300 through commercial facilities.

Asked by former health secretary Jeremy Hunt about the 100,000-a-day end of April target, he said: “I don’t think if we’d announced the 100,000 target a couple of weeks earlier as you suggest we would be in any different position now because we were continuing the drive to increase testing all along.”

But Professor Anthony Costello, of University College London’s Institute for Global Health, warned there needed to be tests carried out at a district and community level.

Speaking at the committee, he said: “Actually, I’m not sure we need 100,000 tests per day in reality if we can get this epidemic damped down.

“More important is to have the systems in place and I’d like to know much more from Hancock – how are they restructuring the public health teams? Have they got plans in place? Will they need extra volunteers, for example?”

He added that “just asking people to self-isolate is not going to achieve the quarantine you want to”.

Dame Donna Kinnair, chief executive of the Royal College of Nursing, said sick NHS workers are being forced to drive two hours to be tested.

She criticised the “unclear” guidance on how NHS staff and care workers are able to access testing.

At the committee meeting, she said: “There is an issue about how we get nurses and others to be able to be tested because actually it is not quite clear.

“What I’m hearing from the front line is nurses are sometimes just driving two hours feeling very unwell with possible symptoms of coronavirus and driving to a testing station.

“Sometimes if you haven’t got an appointment you’re turned away only to be told to come back another time.

“So we need some really clear direction on how we can access testing both in the NHS but more so for social care, because they don’t have the same infrastructure as the NHS.”

The Health Secretary said 22 drive-through centres have opened across the UK to enable more testing for frontline staff.

These are in locations including Glasgow, Cardiff, Belfast, Nottingham, Leeds and London, with the aim to open 50 centres across the country.

Mr Hancock added: “Once we’ve got those established we’re going to have mobile units and then when the technology is good enough we will have home testing kits as well.”

He announced the eligibility for testing will be expanded to non-patients “relatively soon” with increasing capacity.

“I can today [Friday] expand the eligibility for testing to police, the fire service, prison staff, critical local authority staff, the judiciary and DWP staff who need it and we’re able to do that because of the scale-up of testing,” he said.

Asked by Science and Technology Committee chairman Greg Clark whether asymptomatic health workers should be routinely tested, Mr Hancock said: “This is something that we are looking at.”

He said the Government would be building up contact tracing teams as part of the “test, track and trace” strategy.

He told the committee that teams from NHSX – which includes the Department of Health, NHS England and NHS providers – Public Health England and “a huge array of partners” will work together to create a contract tracing app.

He said the app will help users do contact tracing themselves “by notifying people who they have been in close contact with… and then of course link that to testing, so people can get the tests.”