Half of nursing staff ‘pressured to work without protective equipment’ 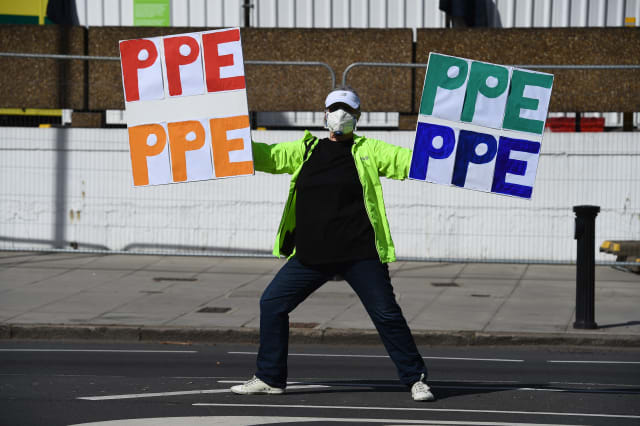 Half of nursing staff have felt pressure to work without appropriate protective equipment during the coronavirus crisis, according to a survey by the Royal College of Nursing.

The union has urged the Government and organisations providing health and care services to take “immediate action” on concerns raised over personal protective equipment (PPE) shortages.

Demands to get such equipment to NHS staff have intensified during the pandemic as the number of healthcare professionals who have died after contracting Covid-19 continues to rise.

Nearly 14,000 nurses, midwives and nursing support workers responded to the survey by the Royal College of Nursing (RCN) over the Easter bank holiday weekend.

It found that half of all respondents have felt pressure to care for a patient without the protection outlined in the current PPE guidance.

One in 10 (12%) nurses reported relying on face or eye protection that was homemade or that they had bought themselves, while only half (54%) of professionals believe they have an adequate supply of alcohol hand gel.

Respondents include those working in high-risk environments, such as where patients suspected of contracting Covid-19 are being treated on ventilators.

The RCN said that of those working in high-risk areas, around half (51%) reported being asked to re-use items of PPE that were marked as “single use” by manufacturers.

Of those treating Covid-19 patients elsewhere, over a third (39%) said this was the case.

The RCN has previously urged its members to refuse to treat patients as a “last resort” if adequate PPE could not be provided.

It said the results of the survey, conducted between April 10 to Monday 13, will be be shared directly with associated government agencies and regulators, including the Health and Safety Executive.

Dame Donna Kinnair, chief executive and general secretary of the RCN, said: “This crisis is taking the lives of nursing staff, and their colleagues feel they’ve been left exposed.

“All decision makers involved here need to get an urgent grip on the situation.

“Nursing staff just want to do their jobs – they must be given protection in order to do so.”

Giving evidence to the Health and Social Care select committee on Friday, Dame Donna said that PPE continued to be an issue amongst frontline staff.

“As of this moment I am very worried that we don’t have enough PPE for staff to protect themselves, let alone facilitate giving it to relatives to be able to see their loved ones during the end of life care,” she told MPs.