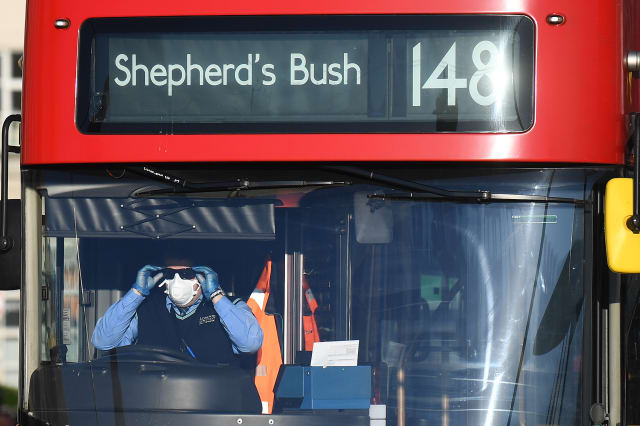 Bus passengers in London will not have to pay to travel under new measures to protect drivers.

Transport for London (TfL) announced that customers “will not be required to touch in” with their payment card or device from Monday.

This is to avoid passengers approaching the driver’s cab, where all buses have a card reader.

London Mayor Sadiq Khan announced on Monday that 21 transport workers, including 15 bus workers, have died in the capital after testing positive for Covid-19.

A south London bus driver identified only as Lorraine, 62, said last week in an online video that she is “proud to do her job” but “frightened to die” as she begged the Government to do more to help protect transport staff.

Bus travel in the capital normally costs £1.50 for unlimited journeys within an hour, up to a maximum of £4.50 per day.

The temporary decision to tell passengers they no longer need to pay coincides with a trial involving passengers using the middle door to board on nine routes being extended to all buses in the capital.

Passengers using London buses normally board using the front door and leave by the middle door.

TfL said the pilot scheme showed that passengers can “keep a safe distance” when entering and leaving through the middle door because demand for bus travel is 85% lower than normal.

Londoners have been told to only use public transport for essential journeys.

Other safety measures include discouraging the use of seats near drivers, covering the holes in their protective screens with clear film, and a rigorous cleaning regime.

TfL’s director of bus operations, Claire Mann, said: “Bus drivers are pivotal in ensuring critical workers like NHS staff and grocery workers can perform the vital roles they do during this national emergency.

“Their efforts are nothing short of heroic, and it is essential that we leave no stone unturned when looking to protect them.

“Extending middle-door only boarding across the bus network will add another layer of protection on top of the other robust safeguards in place.

“Even with these significant safety enhancements, I would like to remind Londoners to stay at home to ensure that critical workers and London’s bus drivers can get around the city safely.”

Pete Kavanagh, regional secretary at trade union Unite, which campaigned for front-door boarding to be banned across the whole of London, said: “This is a very welcome move and we are very relieved that TfL is listening to Unite and its members.

“We have lost members of our bus family in recent days and we refuse to lose any more.

“Unite has been asking for central boarding as an essential safety measure during these times because bus workers are, understandably, fearful for their health.”