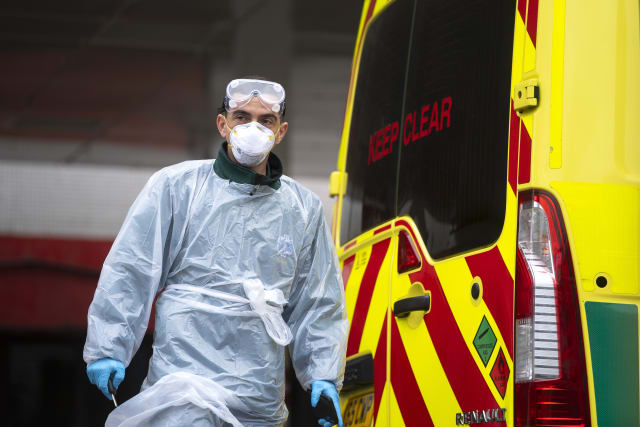 Thousands of doctors and nurses are concerned about inadequate supplies of personal protection equipment (PPE) amid fears some hospitals could run out entirely this weekend.

A British Medical Association (BMA) survey of more than 6,000 doctors across the country said a significant amount of them remain without the protection they need to guard against Covid-19.

Meanwhile another survey by the Royal College of Nursing (RCN) found half of nurses have felt pressure to work without appropriate protective equipment during the crisis.

It comes after it was revealed that doctors and nurses in England will be asked to work without full-length gowns and to reuse items when treating coronavirus patients ahead of expected shortages of protective garments, prompting outrage from unions.

Chris Hopson, chairman of NHS Providers, said some trusts will run out of supplies in the next 24-48 hours because we have “reached the point where national stock of fully fluid repellent gowns and coveralls (is) exhausted”.

BMA council chairman Dr Chaand Nagpaul said: “Two months into the Covid-19 crisis in Britain, we shouldn’t still be hearing that doctors feel unprotected when they go to work.

“The Government says that one billion items will soon have been shipped, and while there have been signs of improvement, our research clearly shows that equipment is not reaching all doctors working on the front line.

“We heard this week that a hospital boss resorted to asking the BBC for contacts at a clothing brand in a bid to get hold of gowns, and just yesterday the Health and Social Care Secretary said he could not guarantee that hospitals would not run out this weekend.

“Meanwhile, the BMA has been inundated with approaches from companies offering to do their bit to supply the NHS.

“This is a truly sorry state of affairs, and we renew our call for the Government to work with manufacturers to ramp up domestic supply.”

The BMA survey found just under a third of doctors working in high risk areas – aerosol-general procedure (AGP) areas – and other non-AGP hospital settings said they were sometimes pressurised to work without adequate protection, while 50% of doctors working in AGP areas said there were shortages of, or no supply at all of, long-sleeved disposable gowns and disposable goggles.

And 56% said the same regarding full-face visors.

Scrubs and eye protections were in short supply, or not available, in other hospital settings, 52% of doctors said.

Dr Nagpaul added: “Too many doctors and healthcare staff have already lost their lives. We cannot afford to risk losing any more.”

The BMA said one doctor surveyed said that current levels of PPE left them feeling as though they were being “thrown to the wolves”, while another said they should not be forced to choose between doing their job or keeping themselves and their family safe.

The RCN called on the Government to take immediate action regarding the PPE situation.

If the gowns are not available, clinical staff are now advised to wear “disposable, non-fluid repellent gowns or coveralls” or “washable surgical gowns”, with aprons, and to wash their forearms afterwards.

The updated guidance states that the “reuse of PPE should be implemented until confirmation of adequate re-supply is in place”, and that “some compromise is needed to optimise the supply of PPE in times of extreme shortages”.

A Department of Health spokesman said: “New clinical advice has been issued today to make sure that if there are shortages in one area, frontline staff know what PPE to wear instead to minimise risk.”

On Friday, Health Secretary Matt Hancock told a Commons committee that he would “love to be able to wave a magic wand” to increase PPE supplies.

He told the Commons Health and Social Care Committee that the equipment was a “precious resource” and that maintaining supplies was challenging due to the very high global demand.

He told the Times: “The Government is going to have to accept and admit we are coming out of lockdown.

“We need to trust the British people and not treat them like children. We must respect their common sense. They need to know that the sun is rising at some point in an economic sense.”

According to the Daily Telegraph, ministers have not agreed a strategy and will not formulate a plan until Boris Johnson resumes his duties as Prime Minister.

Mr Johnson is continuing his recovery at Chequers and is not doing Government work, according to a Government spokesman.